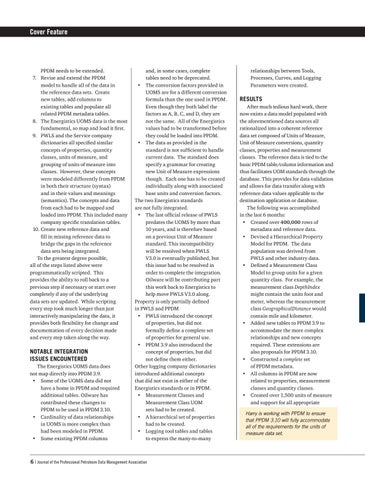 PPDM needs to be extended. 7. Revise and extend the PPDM model to handle all of the data in the reference data sets. Create new tables, add columns to existing tables and populate all related PPDM metadata tables. 8. The Energistics UOMS data is the most fundamental, so map and load it first. 9. PWLS and the Service company dictionaries all specified similar concepts of properties, quantity classes, units of measure, and grouping of units of measure into classes. However, these concepts were modeled differently from PPDM in both their structure (syntax) and in their values and meanings (semantics). The concepts and data from each had to be mapped and loaded into PPDM. This included many company specific translation tables. 10. Create new reference data and fill in missing reference data to bridge the gaps in the reference data sets being integrated. To the greatest degree possible, all of the steps listed above were programmatically scripted. This provides the ability to roll back to a previous step if necessary or start over completely if any of the underlying data sets are updated. While scripting every step took much longer than just interactively manipulating the data, it provides both flexibility for change and documentation of every decision made and every step taken along the way.

NOTABLE INTEGRATION ISSUES ENCOUNTERED The Energistics UOMS data does not map directly into PPDM 3.9. • Some of the UOMS data did not have a home in PPDM and required additional tables. Oilware has contributed these changes to PPDM to be used in PPDM 3.10. • Cardinality of data relationships in UOMS is more complex than had been modeled in PPDM. • Some existing PPDM columns

and, in some cases, complete tables need to be deprecated. • The conversion factors provided in UOMS are for a different conversion formula than the one used in PPDM. Even though they both label the factors as A, B, C, and D, they are not the same. All of the Energistics values had to be transformed before they could be loaded into PPDM. • The data as provided in the standard is not sufficient to handle current data. The standard does specify a grammar for creating new Unit of Measure expressions though. Each one has to be created individually along with associated base units and conversion factors. The two Energistics standards are not fully integrated. • The last official release of PWLS predates the UOMS by more than 10 years, and is therefore based on a previous Unit of Measure standard. This incompatibility will be resolved when PWLS V3.0 is eventually published, but this issue had to be resolved in order to complete the integration. Oilware will be contributing part this work back to Energistics to help move PWLS V3.0 along. Property is only partially defined in PWLS and PPDM • PWLS introduced the concept of properties, but did not formally define a complete set of properties for general use. • PPDM 3.9 also introduced the concept of properties, but did not define them either. Other logging company dictionaries introduced additional concepts that did not exist in either of the Energistics standards or in PPDM. • Measurement Classes and Measurement Class UOM sets had to be created. • A hierarchical set of properties had to be created. • Logging tool tables and tables to express the many-to-many

relationships between Tools, Processes, Curves, and Logging Parameters were created.

RESULTS After much tedious hard work, there now exists a data model populated with the aforementioned data sources all rationalized into a coherent reference data set composed of Units of Measure, Unit of Measure conversions, quantity classes, properties and measurement classes. The reference data is tied to the basic PPDM table/column information and thus facilitates UOM standards through the database. This provides for data validation and allows for data transfer along with reference data values applicable to the destination application or database. The following was accomplished in the last 6 months: • Created over 400,000 rows of metadata and reference data. • Devised a Hierarchical Property Model for PPDM. The data population was derived from PWLS and other industry data. • Defined a Measurement Class Model to group units for a given quantity class. For example, the measurement class DepthIndex might contain the units foot and meter, whereas the measurement class GeographicalDistance would contain mile and kilometer. • Added new tables to PPDM 3.9 to accommodate the more complex relationships and new concepts required. These extensions are also proposals for PPDM 3.10. • Constructed a complete set of PPDM metadata. • All columns in PPDM are now related to properties, measurement classes and quantity classes. • Created over 1,500 units of measure and support for all appropriate Harry is working with PPDM to ensure that PPDM 3.10 will fully accommodate all of the requirements for the units of measure data set.