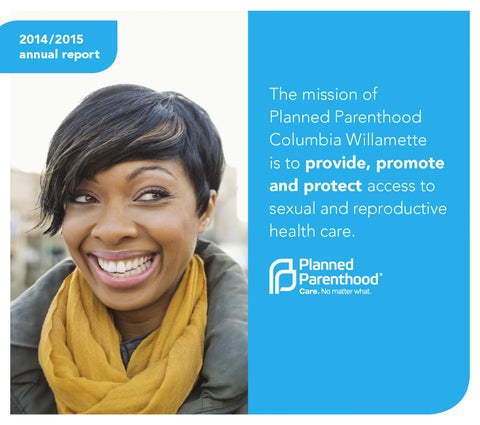 The mission of Planned Parenthood Columbia Willamette is to provide, promote and protect access to sexual and reproductive health care.

Stronger Together This past year has been one of tremendous growth and change for PPCW. Despite the untold challenges we faced last year, PPCW remains committed to be the provider of expert health care for thousands of Oregonians and Washingtonians; many who rely solely on us for services.

BOARD OF DIRECTORS 2015-2016 Beverly Pearman Chair

Last fall we opened a new health center in Milwaukie - Oak Grove, Oregon. With this new health center, we have increased the number of patients we serve in Clackamas County — an area that has one of the state’s highest growth rates of young people in need of PPCW’s services. The opening of this new health center furthers our mission of providing reproductive health care, no matter what. PPCW has placed educators in the communities where our health centers reside in Oregon, including Portland, Salem and Bend and also in Vancouver, Washington. Their role is to design education initiatives based on the community’s needs. This may include programs like Teen Council or more grass roots efforts such as parent or teen sexuality education workshops. PPCW will partner with Multnomah County and Portland Public Schools in the 2016-17 planning phase of Adolescents and Communities Together (ACT) — teen pregnancy prevention project. As well as opening the new Milwaukie-Oak Grove health center, PPCW now offers hormone provision, in addition to preventative care, to Transgender patients. We are thrilled to expand our services to cover this growing community. PPCW has served the women and families of Oregon and Southwest Washington proudly since 1963. With the addition of this new service, we’re excited to reach even more communities in need of high quality health care and education. The health of our patients and the communities we serve is our top priority, and we are committed to ensuring access to high-quality, affordable health care and information. In our fiscal year 2016 PPCW integrated its health equity, education, and outreach efforts, and brought them together under one umbrella. Under the direction of our Director of Equity and Inclusion, PPCW is working on an internal consensus of priorities for outreach,

the means to support them, and building tangible collaborations. As noted previously, PPCW continues to engage with many community-based organizations one-on-one, through organization outreach and educational programming. Importantly, our educational programs, Teen Council and Health Equity Youth Advocates (HEYA), reach into schools and communities where there are pronounced economic, health and educational disparities. Sirius Bonner, our new Director of Equity and Inclusion, has been with us for five months. Through interactions with leadership and staff at PPCW, Sirius recognizes a commitment to diversity throughout the organization and sees numerous opportunities to extend this commitment into practice. Sirius has put forward a preliminary plan to the board and senior staff with a focus on changing policy, the culture at PPCW, maintaining and building relationships with community partners, and creating an equity plan for the organization. The equity plan is slated to be finalized this spring. Our continued collaboration with political partners Planned Parenthood Advocates of Oregon and Planned Parenthood Votes Northwest is vital as they fight to keep Oregon and Washington among the most progressive states in the nation for reproductive rights. We want to recognize and thank you for your continued support for our organization. Without it, our health centers could not continue to provide the essential health care services to the individuals and families who need us most. Our doors are open to everyone and, as Planned Parenthood embarks on its one-hundredth year, we intend to keep it that way.

Your Support Makes the Difference! Your generosity allows us to care for patients who would otherwise not have access to sexual and reproductive health care. Your continued support helps PPCW to invest in the future to bring high-quality, low-cost health services to our patients. Thank you for helping us fulfill our mission with your ongoing support and generosity.

What do a chemistry teacher (Catlin Gable, 20 years) and a physical therapist (OHSU, 30 years) have in common? A lot, if it is Edie and Elaine. After retirement, both decided to volunteer at Planned Parenthood where they met and discovered mutual tastes in movies, music, sewing, and recipes. Edie has been doing the yearly “purge” (when we had paper charts) since 1998 and Elaine started in 2006. They also make medication abortion packets, and do other valuable but time-

consuming tasks that PPCW staff is delighted to delegate. “It keeps us in touch with young people and we feel useful.” Edie has studied Spanish for many years and travels to a Spanish-speaking country annually. She is a voracious reader and is in two book groups. Elaine is interested in Jungian psychology and her family’s genealogy. They both enjoy making aprons, baby blankets, and potholders for various staff celebrations.

Having grown up before Roe vs Wade, both are immensely appreciative and supportive of Planned Parenthood’s vital mission.

2014/2015* honor roll of donors We are grateful to the many generous donors in our region who invest in Planned Parenthood. Your philanthropic partnership advances Planned Parenthood as a movement that improves lives and preserves the self-determination and wellbeing that are the right of every human. Thank you!

* This list represents generous gifts and pledges made between July 1, 2014 and June 30, 2015. Please accept our apologies for any omissions or errors. Please contact us at 503.775.4931 x 4 or development@ppcw.org to inform us of corrections.

Legacy Society Membership recognizes supporters who have ensured Planned Parenthoodâ&#x20AC;&#x2122;s future by including the organization in their estate plans. Legacy Society

To find out more about the benefits of giving to Planned Parenthood and the unique impact you can make by supporting our services and work, please contact Margot Martin at 503.775.4931 x 4. Thank you for your support!

To save money and be more environmentally responsible, PPCW prints only a few copies of our Annual Report. Instead, the full report is available online for all our supporters to view at www.ppcw.org/AnnualReport. This allows us to put more money toward health services for our patients and education programs for the community. www.ppcw.org/AnnualReport Planned Parenthood Columbia Willamette 3727 NE Martin Luther King Jr. Blvd. Portland, Oregon 97212 503.775.4931 www.ppcw.org www.facebook.com/PlannedParenthoodCW www.instagram.com/Planned_Parenthood_CW For health care and appointments: 1.888.576.PLAN (7526) 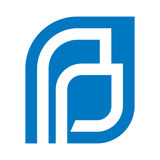