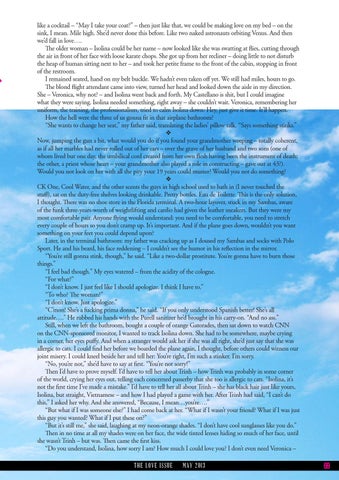 like a cocktail – “May I take your coat?” – then just like that, we could be making love on my bed – on the sink, I mean. Mile high. She’d never done this before. Like two naked astronauts orbiting Venus. And then we’d fall in love…. The older woman – Isolina could be her name – now looked like she was swatting at flies, cutting through the air in front of her face with loose karate chops. She got up from her recliner – doing little to not disturb the heap of human sitting next to her – and took her petite frame to the front of the cabin, stopping in front of the restroom. I remained seated, hand on my belt buckle. We hadn’t even taken off yet. We still had miles, hours to go. The blond flight attendant came into view, turned her head and looked down the aisle in my direction. She – Veronica, why not? – and Isolina went back and forth. My Castellano is shit, but I could imagine what they were saying. Isolina needed something, right away – she couldn’t wait. Veronica, remembering her uniform, the training, the professionalism, tried to calm Isolina down: Hey, just give it time. It’ll happen. How the hell were the three of us gonna fit in that airplane bathroom? “She wants to change her seat,” my father said, translating the ladies’ pillow talk. “Says something stinks.” v Now, jumping the gun a bit, what would you do if you found your grandmother weeping – totally coherent, as if all her marbles had never rolled out of her ears – over the grave of her husband and two sons (one of whom lived but one day, the umbilical cord created from her own flesh having been the instrument of death; the other, a priest whose heart – your grandmother also played a role in constructing – gave out at 43?). Would you not look on her with all the pity your 19 years could muster? Would you not do something? v CK One, Cool Water, and the other scents the guys in high school used to bath in (I never touched the stuff), sat on the duty-free shelves looking drinkable. Pretty bottles. Eau de Toilette. This is the only solution, I thought. There was no shoe store in the Florida terminal. A two-hour layover, stuck in my Sambas, aware of the funk three-years-worth of weightlifting and cardio had given the leather sneakers. But they were my most comfortable pair. Anyone flying would understand: you need to be comfortable, you need to stretch every couple of hours so you don’t cramp up. It’s important. And if the plane goes down, wouldn’t you want something on your feet you could depend upon? Later, in the terminal bathroom: my father was cracking up as I doused my Sambas and socks with Polo Sport. He and his beard, his face reddening – I couldn’t see the humor in his reflection in the mirror. “You’re still gonna stink, though,” he said. “Like a two-dollar prostitute. You’re gonna have to burn those things.” “I feel bad though.” My eyes watered – from the acidity of the cologne. “For what?” “I don’t know. I just feel like I should apologize. I think I have to.” “To who? The woman?” “I don’t know. Just apologize.” “C’mon! She’s a fucking prima donna,” he said. “If you only understood Spanish better! She’s all attitude….” He rubbed his hands with the Purell sanitizer he’d brought in his carry-on. “And no ass.” Still, when we left the bathroom, bought a couple of orange Gatorades, then sat down to watch CNN on the CNN-sponsored monitor, I wanted to track Isolina down. She had to be somewhere, maybe crying in a corner, her eyes puffy. And when a stranger would ask her if she was all right, she’d just say that she was allergic to cats. I could find her before we boarded the plane again, I thought, before others could witness our joint misery. I could kneel beside her and tell her: You’re right, I’m such a stinker. I’m sorry. “No, you’re not,” she’d have to say at first. “You’re not sorry!” Then I’d have to prove myself. I’d have to tell her about Trinh – how Trinh was probably in some corner of the world, crying her eyes out, telling each concerned passerby that she too is allergic to cats. “Isolina, it’s not the first time I’ve made a mistake.” I’d have to tell her all about Trinh – she has black hair just like yours, Isolina, but straight, Vietnamese – and how I had played a game with her. After Trinh had said, “I can’t do this,” I asked her why. And she answered, “Because, I mean…you’re….” “But what if I was someone else?” I had come back at her. “What if I wasn’t your friend? What if I was just this guy you wanted? What if I put these on?” “But it’s still me,” she said, laughing at my neon-orange shades. “I don’t have cool sunglasses like you do.” Then in no time at all my shades were on her face, the wide tinted lenses hiding so much of her face, until she wasn’t Trinh – but was. Then came the first kiss. “Do you understand, Isolina, how sorry I am? How much I could love you? I don’t even need Veronica – 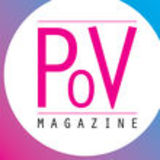 Welcome to issue 6 of PoV Magazine. The LOVE issue. PoV is the quarterly, themed magazine with content you create. Take a look inside for th...

Welcome to issue 6 of PoV Magazine. The LOVE issue. PoV is the quarterly, themed magazine with content you create. Take a look inside for th...