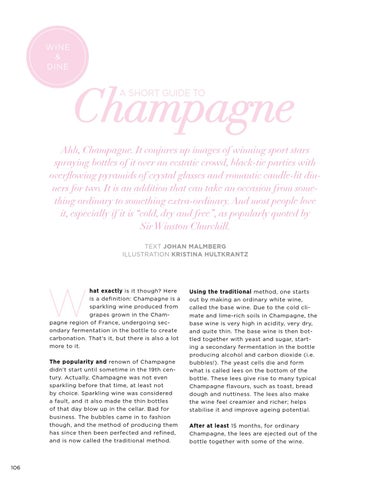 Champagne A SHORT GUIDE TO

Ahh, Champagne. It conjures up images of winning sport stars spraying bottles of it over an ecstatic crowd, black-tie parties with overflowing pyramids of crystal glasses and romantic candle-lit dinners for two. It is an addition that can take an occasion from something ordinary to something extra-ordinary. And most people love it, especially if it is “cold, dry and free”, as popularly quoted by Sir Winston Churchill. TEXT JOHAN MALMBERG ILLUSTRATION KRISTINA HULTKRANTZ

hat exactly is it though? Here is a definition: Champagne is a sparkling wine produced from grapes grown in the Champagne region of France, undergoing secondary fermentation in the bottle to create carbonation. That’s it, but there is also a lot more to it. The popularity and renown of Champagne didn’t start until sometime in the 19th century. Actually, Champagne was not even sparkling before that time, at least not by choice. Sparkling wine was considered a fault, and it also made the thin bottles of that day blow up in the cellar. Bad for business. The bubbles came in to fashion though, and the method of producing them has since then been perfected and refined, and is now called the traditional method.

Using the traditional method, one starts out by making an ordinary white wine, called the base wine. Due to the cold climate and lime-rich soils in Champagne, the base wine is very high in acidity, very dry, and quite thin. The base wine is then bottled together with yeast and sugar, starting a secondary fermentation in the bottle producing alcohol and carbon dioxide (i.e. bubbles!). The yeast cells die and form what is called lees on the bottom of the bottle. These lees give rise to many typical Champagne flavours, such as toast, bread dough and nuttiness. The lees also make the wine feel creamier and richer; helps stabilise it and improve ageing potential. After at least 15 months, for ordinary Champagne, the lees are ejected out of the bottle together with some of the wine. 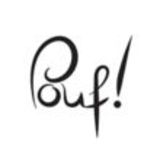 In this issue of Pouf! Magazine we give you the essentials of what you need to know about opera, Champagne, how to prepare a new year’s menu...

In this issue of Pouf! Magazine we give you the essentials of what you need to know about opera, Champagne, how to prepare a new year’s menu...