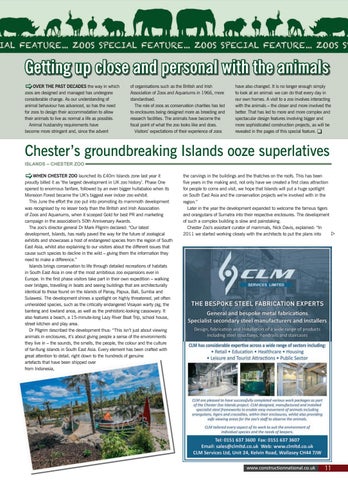 Getting up close and personal with the animals [

OVER THE PAST DECADES the way in which zoos are designed and managed has undergone considerable change. As our understanding of animal behaviour has advanced, so has the need for zoos to design their accommodation to allow their animals to live as normal a life as possible. Animal husbandry requirements have become more stringent and, since the advent

of organisations such as the British and Irish Association of Zoos and Aquariums in 1966, more standardised. The role of zoos as conservation charities has led to enclosures being designed more as breeding and research facilities. The animals have become the focal point of what the zoo looks like and does. Visitors’ expectations of their experience of zoos

have also changed. It is no longer enough simply to look at an animal: we can do that every day in our own homes. A visit to a zoo involves interacting with the animals – the closer and more involved the better. That has led to more and more complex and spectacular design features involving bigger and more sophisticated construction projects, as will be revealed in the pages of this special feature. q

proudly billed it as ‘the largest development in UK zoo history’. Phase One opened to enormous fanfare, followed by an even bigger hullabaloo when its Monsoon Forest became the UK’s biggest ever indoor zoo exhibit. This June the effort the zoo put into promoting its mammoth development was recognised by no lesser body than the British and Irish Association of Zoos and Aquariums, when it scooped Gold for best PR and marketing campaign in the association’s 50th Anniversary Awards. The zoo’s director general Dr Mark Pilgrim declared: “Our latest development, Islands, has really paved the way for the future of zoological exhibits and showcases a host of endangered species from the region of South East Asia, whilst also explaining to our visitors about the different issues that cause such species to decline in the wild – giving them the information they need to make a difference.” Islands brings conservation to life through detailed recreations of habitats in South East Asia in one of the most ambitious zoo expansions ever in Europe. In the first phase visitors take part in their own expedition – walking over bridges, travelling in boats and seeing buildings that are architecturally identical to those found on the islands of Panay, Papua, Bali, Sumba and Sulawesi. The development shines a spotlight on highly threatened, yet often unheralded species, such as the critically endangered Visayan warty pig, the banteng and lowland anoa, as well as the prehistoric-looking cassowary. It also features a beach, a 15-minute-long Lazy River Boat Trip, school house, street kitchen and play area. Dr Pilgrim described the development thus: “This isn’t just about viewing animals in enclosures, it’s about giving people a sense of the environments they live in – the sounds, the smells, the people, the colour and the culture of far-flung islands in South East Asia. Every element has been crafted with great attention to detail, right down to the hundreds of genuine artefacts that have been shipped over from Indonesia,

the carvings in the buildings and the thatches on the roofs. This has been five years in the making and, not only have we created a first class attraction for people to come and visit, we hope that Islands will put a huge spotlight on South East Asia and the conservation projects we’re involved with in the region.” Later in the year the development expanded to welcome the famous tigers and orangutans of Sumatra into their respective enclosures. The development of such a complex building is slow and painstaking. Chester Zoo’s assistant curator of mammals, Nick Davis, explained: “In 2011 we started working closely with the architects to put the plans into