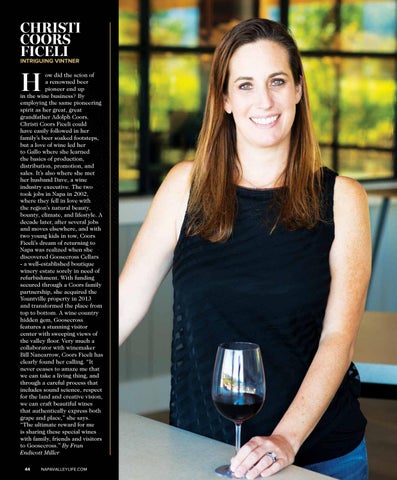 ow did the scion of a renowned beer pioneer end up in the wine business? By employing the same pioneering spirit as her great, great grandfather Adolph Coors. Christi Coors Ficeli could have easily followed in her family’s beer soaked footsteps, but a love of wine led her to Gallo where she learned the basics of production, distribution, promotion, and sales. It’s also where she met her husband Dave, a wine industry executive. The two took jobs in Napa in 2002, where they fell in love with the region’s natural beauty, bounty, climate, and lifestyle. A decade later, after several jobs and moves elsewhere, and with two young kids in tow, Coors Ficeli’s dream of returning to Napa was realized when she discovered Goosecross Cellars - a well-established boutique winery estate sorely in need of refurbishment. With funding secured through a Coors family partnership, she acquired the Yountville property in 2013 and transformed the place from top to bottom. A wine country hidden gem, Goosecross features a stunning visitor center with sweeping views of the valley floor. Very much a collaborator with winemaker Bill Nancarrow, Coors Ficeli has clearly found her calling. “It never ceases to amaze me that we can take a living thing, and through a careful process that includes sound science, respect for the land and creative vision, we can craft beautiful wines that authentically express both grape and place,” she says. “The ultimate reward for me is sharing these special wines with family, friends and visitors to Goosecross.” By Fran Endicott Miller 44 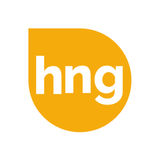