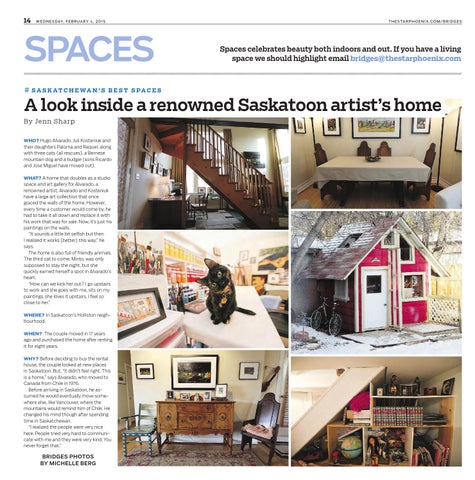 Spaces celebrates beauty both indoors and out. If you have a living space we should highlight email bridges@thestarphoenix.com

A look inside a renowned Saskatoon artist’s home By Jenn Sharp WHO? Hugo Alvarado, Juli Kosteniuk and their daughters Paloma and Raquel, along with three cats (all rescues), a Bernese mountain dog and a budgie (sons Ricardo and Jose Miguel have moved out). WHAT? A home that doubles as a studio space and art gallery for Alvarado, a renowned artist. Alvarado and Kosteniuk have a large art collection that once graced the walls of the home. However, every time a customer would come by, he had to take it all down and replace it with his work that was for sale. Now, it’s just his paintings on the walls. “It sounds a little bit selfish but then I realized it works (better) this way,” he says. The home is also full of friendly animals. The third cat to come, Minto, was only supposed to stay the night, but she quickly earned herself a spot in Alvarado’s heart. “How can we kick her out? I go upstairs to work and she goes with me, sits on my paintings, she loves it upstairs. I feel so close to her.” WHERE? In Saskatoon’s Holliston neighbourhood. WHEN?: The couple moved in 17 years ago and purchased the home after renting it for eight years. WHY? Before deciding to buy the rental house, the couple looked at new places in Saskatoon. But, “it didn’t feel right. This is a home,” says Alvarado, who moved to Canada from Chile in 1976. Before arriving in Saskatoon, he assumed he would eventually move somewhere else, like Vancouver, where the mountains would remind him of Chile. He changed his mind though after spending time in Saskatchewan. “I realized the people were very nice here. People tried very hard to communicate with me and they were very kind. You never forget that.”