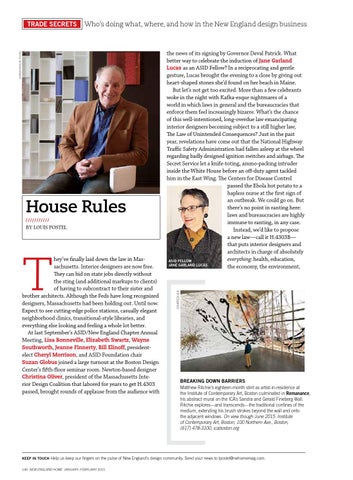 Who’s doing what, where, and how in the New England design business

hey’ve finally laid down the law in Massachusetts. Interior designers are now free. They can bid on state jobs directly without the sting (and additional markups to clients) of having to subcontract to their sister and brother architects. Although the Feds have long recognized designers, Massachusetts had been holding out. Until now. Expect to see cutting-edge police stations, casually elegant neighborhood clinics, transitional-style libraries, and everything else looking and feeling a whole lot better. At last September’s ASID/New England Chapter Annual Meeting, Lisa Bonneville, Elizabeth Swartz, Wayne Southworth, Jeanne Finnerty, Bill Elinoff, presidentelect Cheryl Morrison, and ASID Foundation chair Suzan Globus joined a large turnout at the Boston Design Center’s fifth-floor seminar room. Newton-based designer Christina Oliver, president of the Massachusetts Interior Design Coalition that labored for years to get H.4303 passed, brought rounds of applause from the audience with

the news of its signing by Governor Deval Patrick. What better way to celebrate the induction of Jane Garland Lucas as an ASID Fellow? In a reciprocating and gentle gesture, Lucas brought the evening to a close by giving out heart-shaped stones she’d found on her beach in Maine. But let’s not get too excited. More than a few celebrants woke in the night with Kafka-esque nightmares of a world in which laws in general and the bureaucracies that enforce them feel increasingly bizarre. What’s the chance of this well-intentioned, long-overdue law emancipating interior designers becoming subject to a still higher law, The Law of Unintended Consequences? Just in the past year, revelations have come out that the National Highway Traffic Safety Administration had fallen asleep at the wheel regarding badly designed ignition switches and airbags. The Secret Service let a knife-toting, ammo-packing intruder inside the White House before an off-duty agent tackled him in the East Wing. The Centers for Disease Control passed the Ebola hot potato to a hapless nurse at the first sign of an outbreak. We could go on. But there’s no point in ranting here: laws and bureaucracies are highly immune to ranting, in any case. Instead, we’d like to propose a new law—call it H.4303B— that puts interior designers and architects in charge of absolutely everything: health, education, aSid Fellow Jane garland lucaS the economy, the environment,

Breaking down BarrierS Matthew ritchie’s eighteen-month stint as artist-in-residence at the institute of contemporary art, boston culminated in remanance, his abstract mural on the ica’s Sandra and Gerald fineberg Wall. ritchie explores—and transcends—the traditional confines of the medium, extending his brush strokes beyond the wall and onto the adjacent windows. on view though June 2015. Institute of Contemporary art, Boston, 100 Northern ave., Boston, (617) 478-3100, icaboston.org

keep in Touch Help us keep our fingers on the pulse of new england’s design community. Send your news to lpostel@nehomemag.com. 140 New eNglaNd Home january–february 2015

Inside New England’s Design Community by Louis Postel with Jane Garland Lucas, Pat Fortunato, Don Giambastiani, Chris Chus, and Loukas Delmezis of Appleton Lighting TERMS OF USE: This PDF file is furnished with the understanding that it may be posted, distributed, or otherwise used only in its complete and original form. None of the content, written or photographic, may be extracted, reformatted, or used in any other way. If this file is posted online, we also ask that a link to New England Home's Web site, www.nehomemag.com, be provided in conjunction with it. 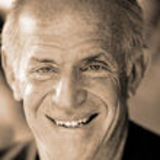