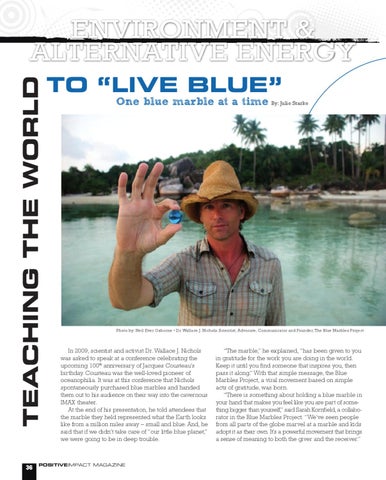 One blue marble at a time By: Julie Starke

In 2009, scientist and activist Dr. Wallace J. Nichols was asked to speak at a conference celebrating the upcoming 100th anniversary of Jacques Cousteau’s birthday. Cousteau was the well-loved pioneer of oceanophilia. It was at this conference that Nichols spontaneously purchased blue marbles and handed them out to his audience on their way into the cavernous IMAX theater. At the end of his presentation, he told attendees that the marble they held represented what the Earth looks like from a million miles away – small and blue. And, he said that if we didn’t take care of “our little blue planet,” we were going to be in deep trouble.

“The marble,” he explained, “has been given to you in gratitude for the work you are doing in the world. Keep it until you find someone that inspires you, then pass it along.” With that simple message, the Blue Marbles Project, a viral movement based on simple acts of gratitude, was born. “There is something about holding a blue marble in your hand that makes you feel like you are part of something bigger than yourself,” said Sarah Kornfield, a collaborator in the Blue Marbles Project. “We’ve seen people from all parts of the globe marvel at a marble and kids adopt it as their own. It’s a powerful movement that brings a sense of meaning to both the giver and the receiver.”

Encouraging positive solutions for life worldwide. More then a resource for sharing stories and articles that provide education, possibilities, ideas and motivation on living a happy, healthy life. 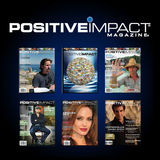