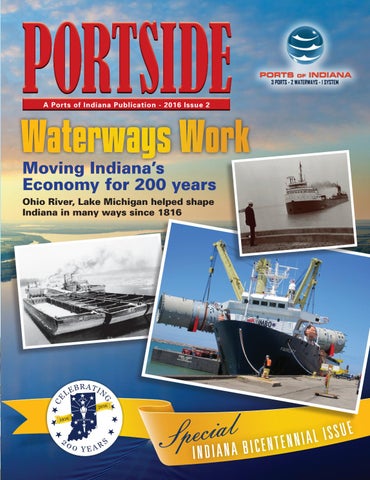 Waterways Helped Shape Indiana in Many Ways Since 1816.... 4

OF STATE’S BORDER IS

TRUCKLOADS OF CARGO PER YEAR

Fun Fact : Is an instrument-rated pilot.

Fun Fact : Enjoys adventure travel. Past trips include sea kayaking in the South Pacific and polar bear trekking in Canada.

Fun Fact : Andrea’s husband is both a lawyer and veterinarian.

Waterways have helped shape Indiana in many ways since 1816

rom launching Lewis & Clark’s expedition and molding the country’s largest steel mills—to connecting the St. Lawrence Seaway and developing the state’s three ports—waterways have shaped Indiana in many ways since its founding in 1816. Below is a journey through the maritime history of Indiana and how the Hoosier state came to have one of the leading waterborne shipping economies in the country.

Moving logs on the Ohio River,

Before exploring the Louisiana Purchase, Meriwether Lewis and William Clark meet at the Ohio River in today’s Clark County, future home of the Port of Indiana-Jeffersonville. 4

Howard Shipyard opens on the Ohio River in Jeffersonville which is now operated by Jeffboat, the largest and longest continually operated inland shipyard in the U.S.

Northwest Ordinance calls for creation of Midwest States and free travel on waterways.

Completed Wabash and Erie Canal links Lake Erie and the Ohio River by 460 miles of canal, the longest ever built in the U.S. Indiana portion stretches from Fort Wayne to Evansville.

The Goodyear Bl im Indiana-Burns Ha p flies over the Port of rb ceremonies July or during dedication 16, 1970.

What is the Bicentennial? Indiana’s Bicentennial is a once-in-a-lifetime occasion. The wish is that all 6.5 million Hoosiers will have a hand in celebrating Indiana’s 200th anniversary of statehood. The Indiana Bicentennial Commission was charged with overseeing the planning and execution of this statewide celebration. The Commission is a fifteen-member body, chaired by Becky Skillman and Lee Hamilton. First Lady Karen Pence serves as the official Bicentennial Ambassador. Legacy Projects allow Hoosiers to celebrate locally. These are community projects highlighting the four key pillars of the Bicentennial: Youth and Education, Community Involvement, Nature Conservation and Historical Celebration. There are more than 1,400 legacy projects representing all 92 counties.

There are also large-scale events happening throughout the Bicentennial year. Attend “Hoosier Homecoming” on Oct. 15 on the Statehouse Lawn for free, family-friendly fun. Tune in or attend our inspirational Statehood Day celebration, “Ignite the Future,” on Dec. 11. How will you celebrate the Bicentennial year? Visit the Indiana Bicentennial website for more information, www.Indiana2016.org.

The opening of I-265 provides direct interstate access to Jeffersonville port.

Port of Indiana-Burns Harbor handled a record shipment of 134 wind turbines in 2010.

Two ships wait to dis charge their cargoes at the Port of Indiana-Burn s Harbor in 2015.

The Ports of Indiana celebrates 50 years.

An inside look at North America’s premier inland port system

ndiana has a truly unique port system. Being far removed from the oceans would generally be thought of as an obstacle for the shipping industry – but for Indiana, this is an advantage. Approximately 57 percent of the state’s boundary is water. Lake Michigan and the Ohio River provide the state with more than 400 miles of navigable waterways and direct routes for maritime shipments to and from global markets. Proudly claiming the moniker “Crossroads of America” because of its extensive highway system, Indiana also has one of the most wide-ranging rail networks in the country. Combine these two robust land transportation options with the largest steel-producing region in North America, as well as thriving manufacturing and agriculture bases —and it becomes evident

how a port system could be so successful 600 miles from an ocean. Indiana’s three public ports share another unique operational advantage because they are managed by a single statewide entity, the Ports of Indiana, which differs from many states where ports are managed through cities or counties that vigorously compete for business within the same state, and often require significant amounts of public funding to maintain operations. The Ports of Indiana is completely self-funded and operates 3,000 acres of maritime industrial parks connected to 15,000 miles of inland shipping channels. Companies located at these ports regularly ship cargo to or from all 50 states and 31 countries around the world.

Indiana’s 3 ports have 1,000 acres of property available for multimodal development? Sites are ideal for steel, agriculture and industrial businesses that move cargo by ship, barge and rail. Here are a few shovel-ready sites at the ports:

Governor calls on Ports of Indiana to explore 4th port

n the 2016 State of the State Address, Governor Mike Pence called on the Ports of Indiana to explore building a fourth port and the first since 1985. “Indiana’s ports have been spectacular catalysts for job growth,” noted Gov. Pence. “That is why I have called upon the Ports of Indiana to vigorously explore the building of a fourth port in the far southeastern part of our state, which could unleash enormous economic investment throughout the southeast region of our state.” The Ports of Indiana is a statewide port authority created by the state legislature in 1961 which operates three ports on the Ohio River and Lake Michigan: Port of Indiana-Burns Harbor (opened in 1970) on Lake Michigan, Port of Indiana-Mount Vernon (opened in 1976) and Port of Indiana-Jeffersonville (opened in 1985), both on the Ohio River. “It’s very gratifying that Governor Pence sees our ports and

marine highways as vital parts of his transportation, infrastructure and economic development initiatives,” said Rich Cooper, CEO for the Ports of Indiana. “He has asked us to explore the development of a new port in a southeast Indiana area that has long been very intriguing to us and is highly worthy of a closer look. We share the Governor’s belief that there is tremendous   Governor Pence opportunity for Indiana to build on its past port successes and further leverage its access to railroads, highways, and the Gulf of Mexico via the Ohio River to generate economic development opportunities in a new region of our state.”

Global steelmaker POSCO breaks ground at Jeffersonville port JEFFERSONVILLE, Ind. – POSCO, a multinational company headquartered in Pohang, South Korea, and the fifth-largest steel producer in the world, broke ground on April 27 for a wire rod processing center at the Port of Indiana-Jeffersonville, creating up to 60 high-wage jobs by 2018. POSCO is South Korea’s fourth largest company, behind Samsung Electronics, SK Holdings and Hyundai Motors, and is ranked No. 162 in Fortune’s Global 500. The $19 million project includes building a 136,000-square-foot facility on approximately 10 acres to process steel wire for fasteners, nuts and bolts used in the automotive industry. POSCO’s key drivers for locating at the port included the ability to ship steel into the Midwest by water and the close proximity to numerous steel and automotiverelated companies. The Jeffersonville port plant will be the company’s second steel processing line and the fourth production line in the U.S.

A new study revealed that Indiana’s three ports annually contribute $7.8 billion in economic activity to the state and nearly 60,000 jobs. This is an increase of 22 percent in economic impact and 16 percent in the number of jobs compared to a 2012 study. The study focused on 2014 data and was conducted by Martin Associates, one of the foremost maritime economic consulting firms in the country, and was peer reviewed by economics professors from Indiana University, University of Notre Dame and Purdue University. “The mission of the Ports of Indiana is to develop and maintain a world-class port system dedicated to growing Indiana’s economy,” said Rich Cooper, CEO for the Ports of Indiana. “Not only does this study quantify the value of the ports to our state’s economy, but it highlights the ports’ growth. Our success is directly related to the success of those companies located at the port as well as other businesses using the port to ship and receive their cargoes. We want to create a port environment that provides our customers a sustainable competitive advantage.” Other annual economic contributions generated by Indiana’s three ports included $3.5 billion in personal income, $1.4 billion in local purchases and $328 million in state and local taxes. (Read the report at www.portsofindiana.com/ media-center/research.)

What do Indiana’s 3 ports mean to the state economy? 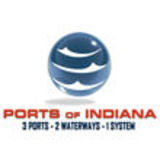 Portside is an award-winning magazine published by the Ports of Indiana covering a broad range of topics related to the state's unique port...

Portside is an award-winning magazine published by the Ports of Indiana covering a broad range of topics related to the state's unique port...