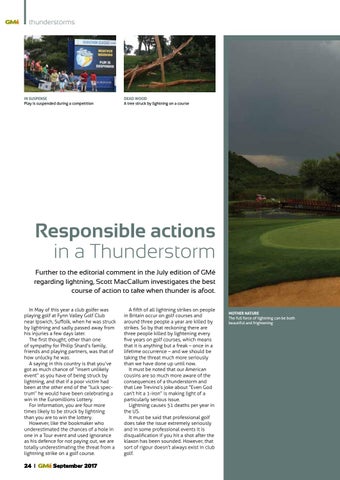 IN SUSPENSE Play is suspended during a competition

DEAD WOOD A tree struck by lightning on a course

Responsible actions in a Thunderstorm Further to the editorial comment in the July edition of GMé regarding lightning, Scott MacCallum investigates the best course of action to take when thunder is afoot. In May of this year a club golfer was playing golf at Fynn Valley Golf Club near Ipswich, Suffolk, when he was struck by lightning and sadly passed away from his injuries a few days later. The first thought, other than one of sympathy for Philip Shard’s family, friends and playing partners, was that of how unlucky he was. A saying in this country is that you’ve got as much chance of “insert unlikely event” as you have of being struck by lightning, and that if a poor victim had been at the other end of the “luck spectrum” he would have been celebrating a win in the Euromillions Lottery. For information, you are four more times likely to be struck by lightning than you are to win the lottery. However, like the bookmaker who underestimated the chances of a hole in one in a Tour event and used ignorance as his defence for not paying out, we are totally underestimating the threat from a lightning strike on a golf course.

A fifth of all lightning strikes on people in Britain occur on golf courses and around three people a year are killed by strikes. So by that reckoning there are three people killed by lightening every five years on golf courses, which means that it is anything but a freak – once in a lifetime occurrence – and we should be taking the threat much more seriously than we have done up until now. It must be noted that our American cousins are so much more aware of the consequences of a thunderstorm and that Lee Trevino’s joke about “Even God can’t hit a 1-iron” is making light of a particularly serious issue. Lightning causes 51 deaths per year in the US. It must be said that professional golf does take the issue extremely seriously and in some professional events it is disqualification if you hit a shot after the klaxon has been sounded. However, that sort of rigour doesn’t always exist in club golf. 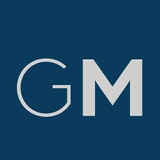