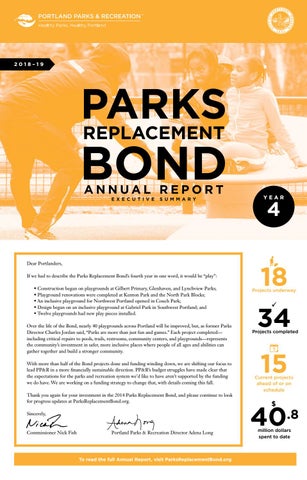 Dear Portlanders, If we had to describe the Parks Replacement Bond’s fourth year in one word, it would be “play”: • Construction began on playgrounds at Gilbert Primary, Glenhaven, and Lynchview Parks; • Playground renovations were completed at Kenton Park and the North Park Blocks; • An inclusive playground for Northwest Portland opened in Couch Park; • Design began on an inclusive playground at Gabriel Park in Southwest Portland; and • Twelve playgrounds had new play pieces installed. Over the life of the Bond, nearly 40 playgrounds across Portland will be improved, but, as former Parks Director Charles Jordan said, “Parks are more than just fun and games.” Each project completed— including critical repairs to pools, trails, restrooms, community centers, and playgrounds—represents the community’s investment in safer, more inclusive places where people of all ages and abilities can gather together and build a stronger community. With more than half of the Bond projects done and funding winding down, we are shifting our focus to lead PP&amp;R in a more financially sustainable direction. PP&amp;R’s budget struggles have made clear that the expectations for the parks and recreation system we’d like to have aren’t supported by the funding we do have. We are working on a funding strategy to change that, with details coming this fall. Thank you again for your investment in the 2014 Parks Replacement Bond, and please continue to look for progress updates at ParksReplacementBond.org.

Current projects ahead of or on schedule

The power of community Marti Clemmons and her family live very close to Kenton Park, which they visit at least once a day. She represented her neighborhood association throughout the design process for the playground’s renovations. “It is an example of how I would like to see future projects happen. What you see here is a direct outcome of the power of community working with the city to better the neighborhood. If you don’t feel like you are heard or feel like you are not doing enough for your community, get involved, talk with your neighbors—because incredible things will happen…” Read Marti’s story at ParksReplacementBond.org

A playground for everyone Renee Becerra’s sons are both autistic. Her older son, David, also has a rare type of epilepsy that affects his speech and motor skills, and he uses a wheelchair part of the time. Gabriel Park is a special place that they love to visit, but they struggle to find activities that work for them on the small, outdated play structure. They are excited that Gabriel Park is the site of PP&amp;R’s next inclusive playground—a space that will welcome users of all ages and abilities… Read Renee’s story at ParksReplacementBond.org

Replace or build 10 to 20 play structures that are closed, at risk of closure, or deficient

An investment in local businesses The Bond isn’t just about new playground equipment, updated facilities, and improved accessibility in some of the city’s most beloved spaces—it also creates jobs and opportunities for local companies. Stacey Drake Edwards, the City’s Prime Contractor Development Program Manager, works with all City bureaus to help the City meet its goal of 20% utilization of Disadvantaged, Minority, Women, and Emerging Small Businesses (D/M/W/ESB) companies. As of June 2019, 41% of the value of Bond funded construction work has been awarded to these certified firms… Read Stacey’s story at ParksReplacementBond.org

centers, and facilities throughout the city:

Prevent closures; replace and repair restrooms, roofs, and other failing structures throughout the system

Hanna Grishkevich was a community engagement liaison for the playground projects at Gilbert Primary and Lynchview Parks. A Ukrainian immigrant herself, Hanna understands the importance of reaching out and assuring immigrants that their opinions really count. At first, the Russian-speaking community viewed the process with a lot of skepticism. But at the meetings, “they could see what process was, from start to finish, and all the possibilities. To be able to be a person who decides something, whose opinion matters, who is able to express an idea is inspiring…” Read Hanna’s story at ParksReplacementBond.org

3 behind schedule 15 ahead of or on schedule

LOOKING FORWARD In 2014, Portland voters approved the Parks Replacement Bond, providing $68M for urgent repairs across the city. The results of this investment are now tangible as Portlanders swim in renovated pools, play on upgraded playgrounds, and have improved access to restrooms and more. In the Bond’s fifth year, PP&amp;R will continue to deliver on the promises made to the community.

To read the full Annual Report, visit ParksReplacementBond.org Information in this report is accurate as of June 30, 2019 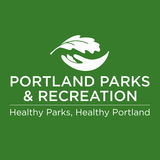