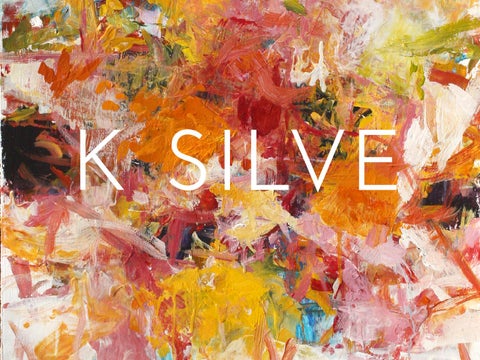 lushness of Hawaii, which offers up the drama of sky, water, and rainforest. She has trained her

resilient territory for younger artists right up through the present. One is geometric abstraction,

eye through plein-air painting, the time-honored practice established by the Barbizon School and

Impressionist artists, and working out of doors in the French landscape taught her much about color

Piet Mondrian and Josef Albers and later the adherents of Minimalism. Another is Abstract

and the importance of its placement in relation to other hues.

Expressionism, the unabashedly spontaneous and often lyrical impulse that marked a definitive

American style and the first great break with European traditions in the late 1940s.

chromatic approach, based in industrial and commercial materials, of many of her peers. But she’s

It is to the latter tradition that Portland-based artist Silve belongs, and in the last two years she

has found fresh and exuberant life in an approach many may have considered played-out. Like her

tool. After starting a painting, she will sometimes take a photo and feed it into the machine.

Manipulations of the canvas on the screen give her an idea of where to go next; it’s a process

certain degree of spontaneity, the impact of the immediate gesture, to draw viewers into her

paintings. To paraphrase the great New York School critic Harold Rosenberg, What goes into the

realize a finished composition (if you look closely, you may discern a faint grid that helps her with

canvas is not a picture but an event. In Silve’s case, it is the act of remembering landscapes, music,

organization and the pulls the components together). The miracle of that process is that there’s no

or even a particular friend. She brings her whole body to the task of painting, as Pollock did, feeling

sacrifice in spontaneity—though Silve may spend months on a painting, its energies still seem as

fresh as if it were tossed off in a day.

paint and canvas. Significantly, many of her works are human-scaled—sometimes the same height

the past—there are echoes of Monet and van Gogh here, as well as her more immediate

dialogue with her materials.

predecessors—and to note her growth away from a dependence on recognizable subject matter.

She seems to be moving into a realm of pure abstraction, and at this juncture in time, the

Silve has spoken about the influence of music on her work, and indeed in the past

dedicated a series to musicians, particularly cellists, since that’s an instrument that speaks to her

possibilities appear to be boundless.

profoundly. But more important for her most recent paintings—which show a huge leap in assurance and innovation—has been the impact of landscape, whether it’s the breathtaking natural terrain around her home (a scenic bonanza that includes Mt. Hood and the Columbia Gorge); the gentler territory of Provence, where she frequently spends a few summer months; or the tropical