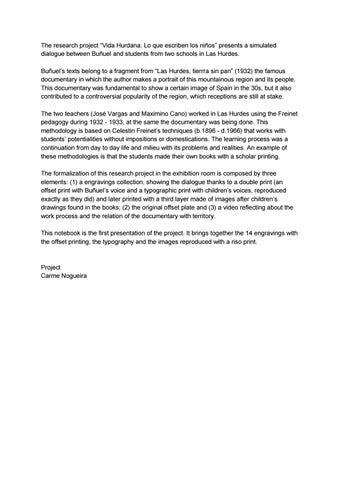 The research project “Vida Hurdana. Lo que escriben los niños” presents a simulated dialogue between Buñuel and students from two schools in Las Hurdes. Buñuel’s texts belong to a fragment from “Las Hurdes, tierrra sin pan” (1932) the famous documentary in which the author makes a portrait of this mountainous region and its people. This documentary was fundamental to show a certain image of Spain in the 30s, but it also contributed to a controversial popularity of the region, which receptions are still at stake. The two teachers (José Vargas and Maximino Cano) worked in Las Hurdes using the Freinet pedagogy during 1932 - 1933, at the same the documentary was being done. This methodology is based on Celestin Freinet’s techniques (b.1896 - d.1966) that works with students’ potentialities without impositions or domestications. The learning process was a continuation from day to day life and milieu with its problems and realities. An example of these methodologies is that the students made their own books with a scholar printing. The formalization of this research project in the exhibition room is composed by three elements: (1) a engravings collection, showing the dialogue thanks to a double print (an offset print with Buñuel’s voice and a typographic print with children’s voices, reproduced exactly as they did) and later printed with a third layer made of images after children’s drawings found in the books; (2) the original offset plate and (3) a video reflecting about the work process and the relation of the documentary with territory. This notebook is the first presentation of the project. It brings together the 14 engravings with the offset printing, the typography and the images reproduced with a riso print.

-1The work displayed in the next pages are originals from children it would be easier to present gimmicky things, this is to say, works more brilliant, touching, profiling and enlarging children´s texts, but doing that wouldn’t be neither honest, nor would have pedagogical worth according to Freinet technique. Publications of this class should be done by children, with total stile and theme freedom and, about all, plenty of honesty.

In the opinion of geographers and travelers the region you are going to visit, called “Las Hurdes”, is a region sterile and inhospitable, in which men are obliged to fight, hourly for its subsistence.

-2Children are called to go to school. These ragged and barefoot children have the same education as every child in any primary school of the world. Long time ago I was in Riomalo de Abajo. You can go by Cambroncino and by Vegas de Coria. The roofs are made from slate; there A lot of vines are grown: people are very clean. There is a very big square, with a lot of trees. Riomalo de Abajo is near the river and has a school as ours.

-3Cloths are brought by hurdanian who emigrate for some months a year to Castilla and Andalucía. They engaged in begging. When they come back to their homeland, they exchange batches of clothing for potatoes. Last Sunday I was told to go with the goats; I think that this is not a job for a girl in the afternoon we take; them to the meadow so they could eat grass. I couldn’t give up thinking that I would better go to school because I don’t like going with the We have 25 goats and 21 goatling.

-4These hungry children are taught as in everywhere else that the sum of all the angles of a triangle is the same as two right angles. The kind of spiders you can find more often here: Common spider that lives in the walls in no so clean spaces, corners, ceilings, attics, etc. The “alguacilillo,, that hunts flies when they are lying on the walls. The “ garrapatas,, that bite in the animal's skin and also people’s to suck their blood. The “arador de la sarna,, very small spider that make galleries in the people’s and animals’ skin, provoking sarna. The alacranes or scorpions (here there are a lot) its bite is very painful; It produces fainting, vomiting, inflammation and sometimes it paralyzes for hours the bitten member.

-5In some villages from Las Hurdes, most of the children are “pilus”. They are abandoned children that women from Las Hurdes go to pick up from “Ciudad Rodrigo Assistence”, situated at a distance two days walk through the mountains. They take care of them in exchange of fifteen pesetas per day. This miserable amount was enough to life all the family till the day, soon, in which “Pilus” industry was forbidden.

-6We discover an unexpected and shocking image in the school, what does this absurd engraving mean here?

-7Here is the title of our “Workbooks”. The principal aim of our work is to acquire ideas. These ideas will be our knowledge’s expression. Our brains will catch them wherever we see them to feed our intelligence and change our soul. But ideas are not enough. We need to join achievement to them, the interpretation, the facts. Without facts that correspond to the ideas there is not possible a word of civilization. And we want to be workers who contribute to improve the complex human life. ¡CULTURE AND WORK! ¡IDEAS AND FACTS!

-8We open a moral book we find in the school. We ask one of the best students to write on the blackboard one of the sentences judgments of the book. The moral these children are taught in is the same that governs us in our civilized world: “Respect property of others” I was with my father in “La Vegacha in front of the school. -¡the wolf is coming! - we heard someone shouting - ¡the wolf the wolf! -”Mendes., - told uncle Colás who was nearby -Tell uncle“Quico,, to pray the San Antonio prayer. Uncle “Quico’ came with us and started to pray with devotion. the Wolf ran and jump hillside up

-9behind some goats that ran away crazy. -It would be better to run after the wolf with sticks to scare him away- said my father? -¡ Quiá it is not necessary- answered uncle Colás When Quico finished the prayer, San Antonio will “close,, the wolf teeth so he could not hurt. Uncle Quico ended the prayer, but the wolf killed one goat, and then another and another We went there running and shouting; some people said ugly words. When we arrived close to the wolf, he ran away taking a “goatling,, with him. We knew then that the goats and the goatling, that the wolf killed were Quico’s,

-11How can you do the travel: In Plasencia there are a car service to Casar de Palomero; from this village to La Huerta, you must go by horse or walking. This country is very poor because the land doesn’t produce much; the ground is full of slates; there are only stones everywhere. We are now in one of the essential points of this reportage. What can people from Las Hurdes do to build the land that feed them? They start looking for a piece of land near the river, and then, with their women, parents and friends help, they take vegetation out (“Jaras” and heather). Tools are always rudimentary: pick and shovel. They haven’t any other instrument to carve. Plow is unknown in most of the villages from Las Hurdes.

-12Once the land is cleared, they build walls made of stone, one up the other, without mortar. This wall will protect the ground from winter floods. When the wall is built they should go to look for vegetal ground in the mountains. They fill sacs that should be brought to their land through the bramble. This work takes usually some weeks. Here you can eat potatoes, beans, turnip, cabbage, lettuce, beans, peas and during holiday meat; during slaughter we eat pig we do blood sausage sausage and long pork sausage. In several houses they eat breadâ&#x20AC;&#x2039;.

-13Look the thin vegetal layer covering a hurdanian land. The first year the harvest is big, but afterwards the land wears out because there are not nitrogenous elements and itÂ´s turning sterile. All the lands in Las Hurdes are like small strips at the border of the river. Often, the winter floods wipe out in some seconds one year work. This is the typical meander from a river In Las Hurdes with the small terrace fields. Rubiaco is a farmstead from Las Hurdes that is on the shore of Jurdano river: there grow ferns and the land is poor and plenty of stones; houses are very small and with slate roofs:they are not plastered or whitewashed outside:people are very poor and many of them beg on the roads.

-14An interior, one of the more comfortables. The father, the child, the daughter in law and the two grandsons are there. In the wall, the presence of this cut paper and the alignment of the tops shows a sense of decoration. In some villages, a woman walk the streets at night. She is the death crier. She is waving a bell and sometimes she stops to intonate a prayer. All the inhabitants of a hurdanian house live in only one room. This house is a little bit more comfortable. It consists of a stable in the ground and, in the first floor, a kitchen and a room. Exceptionally there is a bed.