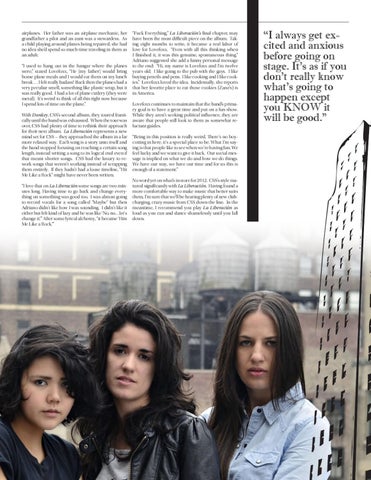 airplanes. Her father was an airplane mechanic, her grandfather a pilot and an aunt was a stewardess. As a child playing around planes being repaired, she had no idea she’d spend so much time traveling in them as an adult. “I used to hang out in the hangar where the planes were,” stated Lovefoxx, “He [my father] would bring home plane meals and I would eat them on my lunch break . . . I felt really badass! Back then the planes had a very peculiar smell, something like plastic wrap, but it was really good. I had a lot of plane cutlery (they were metal). It's weird to think of all this right now because I spend lots of time on the plane.” With Donkey, CSS’s second album, they toured frantically until the band was exhausted. When the tour was over, CSS had plenty of time to rethink their approach for their next album. La Liberación represents a new mind set for CSS -- they approached the album in a far more relaxed way. Each song is a story unto itself and the band stopped focusing on reaching a certain song length, instead writing a song to its logical end even if that meant shorter songs. CSS had the luxury to rework songs that weren’t working instead of scrapping them entirely. If they hadn’t had a loose timeline, “Hit Me Like a Rock” might have never been written. “I love that on La Liberación some songs are two minutes long. Having time to go back and change everything on something was good too. I was almost going to record vocals for a song called "Maybe" but then Adriano didn't like how I was sounding. I didn't like it either but felt kind of lazy and he was like ‘No, no…let's change it.’” After some lyrical alchemy, “it became ‘Hits Me Like a Rock.’”

“Fuck Everything,” La Liberación’s final chapter, may have been the most difficult piece on the album. Taking eight months to write, it became a real labor of love for Lovefoxx. “Even with all this thinking when I finished it, it was this genuine, spontaneous thing.” Adriano suggested she add a funny personal message to the end: “Hi, my name is Lovefoxx and I’m twelve years old. I like going to the pub with the gays. I like buying pencils and pens. I like cooking and I like cookies.” Lovefoxx loved the idea. Incidentally, she reports that her favorite place to eat those cookies (Zane’s) is in America. Lovefoxx continues to maintain that the band’s primary goal is to have a great time and put on a fun show. While they aren’t seeking political influence, they are aware that people still look to them as somewhat reluctant guides. “Being in this position is really weird. There's no boycotting in here, it's a special place to be. What I'm saying is that people like to see when we're having fun. We feel lucky and we want to give it back. Our social message is implied on what we do and how we do things. We have our way, we have our time and for us this is enough of a statement.” No word yet on what’s in store for 2012. CSS’s style matured significantly with La Liberación. Having found a more comfortable way to make music that better suits them, I’m sure that we’ll be hearing plenty of new clubcharging, crazy music from CSS down the line. In the meantime, I recommend you play La Liberación as loud as you can and dance shamelessly until you fall down.

“I always get excited and anxious before going on stage. It's as if you don't really know what's going to happen except you KNOW it will be good.” 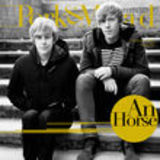