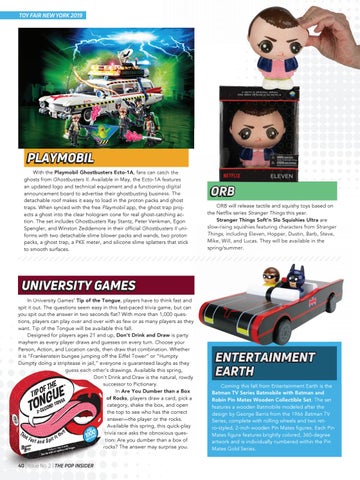 PLAYMOBIL With the Playmobil Ghostbusters Ecto-1A,, fans can catch the ghosts from Ghostbusters II.. Available in May, the Ecto-1A features an updated logo and technical equipment and a functioning digital announcement board to advertise their ghostbusting business. The detachable roof makes it easy to load in the proton packs and ghost traps. When synced with the free Playmobil app, the ghost trap projects a ghost into the clear hologram cone for real ghost-catching action. The set includes Ghostbusters Ray Stantz, Peter Venkman, Egon Spengler, and Winston Zeddemore in their ofﬁcial Ghostbusters II uniforms with two detachable slime blower packs and wands, two proton packs, a ghost trap, a PKE meter, and silicone slime splatters that stick to smooth surfaces.

ORB ORB will release tactile and squishy toys based on the Netﬂix series Stranger Things this year. Stranger Things Soft’n Slo Squishies Ultra are slow-rising squishies featuring characters from Stranger Things, including Eleven, Hopper, Dustin, Barb, Steve, Mike, Will, and Lucas. They will be available in the spring/summer.

UNIVERSITY GAMES In University Games’ Tip of the Tongue, players have to think fast and spit it out. The questions seem easy in this fast-paced trivia game, but can you spit out the answer in two seconds ﬂat? With more than 1,000 questions, players can play over and over with as few or as many players as they want. Tip of the Tongue will be available this fall. Designed for players ages 21 and up, Don’t Drink and Draw is party mayhem as every player draws and guesses on every turn. Choose your Person, Action, and Location cards, then draw that combination. Whether it is “Frankenstein bungee jumping off the Eiffel Tower” or “Humpty Dumpty doing a striptease in jail,” everyone is guaranteed laughs as they guess each other’s drawings. Available this spring, Don’t Drink and Draw is the natural, rowdy successor to Pictionary. In Are You Dumber than a Box of Rocks Rocks, players draw a card, pick a category, shake the box, and open the top to see who has the correct answer—the player or the rocks. Available this spring, this quick-play trivia race asks the obnoxious question: Are you dumber than a box of rocks? The answer may surprise you. 40 | Issue No. 2 | THE POP INSIDER 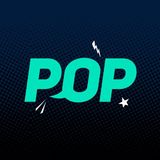