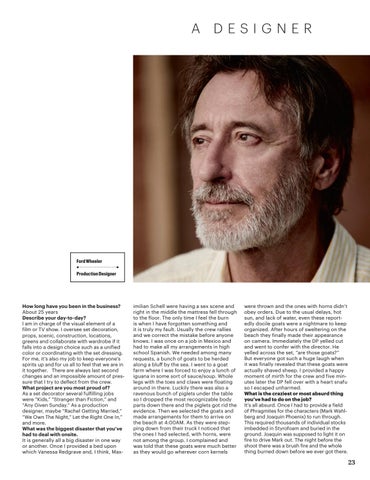 How long have you been in the business? About 25 years Describe your day-to-day? I am in charge of the visual element of a film or TV show. I oversee set decoration, props, scenic, construction, locations, greens and collaborate with wardrobe if it falls into a design choice such as a unified color or coordinating with the set dressing. For me, it’s also my job to keep everyone’s spirits up and for us all to feel that we are in it together. There are always last second changes and an impossible amount of pressure that I try to deflect from the crew. What project are you most proud of? As a set decorator several fulfilling jobs were “Kids,” “Stranger than Fiction,” and “Any Given Sunday.” As a production designer, maybe “Rachel Getting Married,” “We Own The Night,” Let the Right One In,” and more. What was the biggest disaster that you’ve had to deal with onsite. It is generally all a big disaster in one way or another. Once I provided a bed upon which Vanessa Redgrave and, I think, Max-

imilian Schell were having a sex scene and right in the middle the mattress fell through to the floor. The only time I feel the burn is when I have forgotten something and it is truly my fault. Usually the crew rallies and we correct the mistake before anyone knows. I was once on a job in Mexico and had to make all my arrangements in high school Spanish. We needed among many requests, a bunch of goats to be herded along a bluff by the sea. I went to a goat farm where I was forced to enjoy a lunch of iguana in some sort of sauce/soup. Whole legs with the toes and claws were floating around in there. Luckily there was also a ravenous bunch of piglets under the table so I dropped the most recognizable body parts down there and the piglets got rid the evidence. Then we selected the goats and made arrangements for them to arrive on the beach at 4:00AM. As they were stepping down from their truck I noticed that the ones I had selected, with horns, were not among the group. I complained and was told that these goats were much better as they would go wherever corn kernels

were thrown and the ones with horns didn’t obey orders. Due to the usual delays, hot sun, and lack of water, even these reportedly docile goats were a nightmare to keep organized. After hours of sweltering on the beach they finally made their appearance on camera. Immediately the DP yelled cut and went to confer with the director. He yelled across the set, “are those goats?” But everyone got such a huge laugh when it was finally revealed that these goats were actually shaved sheep. I provided a happy moment of mirth for the crew and five minutes later the DP fell over with a heart snafu so I escaped unharmed. What is the craziest or most absurd thing you’ve had to do on the job? It’s all absurd. Once I had to provide a field of Phragmites for the characters (Mark Wahlberg and Joaquin Phoenix) to run through. This required thousands of individual stocks imbedded in Styrofoam and buried in the ground. Joaquin was supposed to light it on fire to drive Mark out. The night before the shoot there was a brush fire and the whole thing burned down before we ever got there. 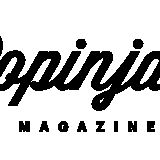