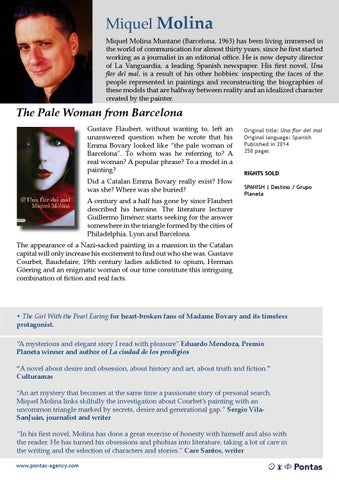 Miquel Molina Miquel Molina Muntané (Barcelona, 1963) has been living immersed in the world of communication for almost thirty years, since he first started working as a journalist in an editorial office. He is now deputy director of La Vanguardia, a leading Spanish newspaper. His first novel, Una flor del mal, is a result of his other hobbies: inspecting the faces of the people represented in paintings and reconstructing the biographies of these models that are halfway between reality and an idealized character created by the painter.

The Pale Woman from Barcelona Gustave Flaubert, without wanting to, left an unanswered question when he wrote that his Emma Bovary looked like “the pale woman of Barcelona”. To whom was he referring to? A real woman? A popular phrase? To a model in a painting? Did a Catalan Emma Bovary really exist? How was she? Where was she buried? A century and a half has gone by since Flaubert described his heroine. The literature lecturer Guillermo Jiménez starts seeking for the answer somewhere in the triangle formed by the cities of Philadelphia, Lyon and Barcelona.

The appearance of a Nazi-sacked painting in a mansion in the Catalan capital will only increase his excitement to find out who she was. Gustave Courbet, Baudelaire, 19th century ladies addicted to opium, Herman Göering and an enigmatic woman of our time constitute this intriguing combination of fiction and real facts.

• The Girl With the Pearl Earing for heart-broken fans of Madame Bovary and its timeless protagonist. “A mysterious and elegant story I read with pleasure” Eduardo Mendoza, Premio Planeta winner and author of La ciudad de los prodigios “A novel about desire and obsession, about history and art, about truth and fiction.” Culturamas “An art mystery that becomes at the same time a passionate story of personal search. Miquel Molina links skilfully the investigation about Courbet’s painting with an uncommon triangle marked by secrets, desire and generational gap.” Sergio VilaSanJuán, journalist and writer “In his first novel, Molina has done a great exercise of honesty with himself and also with the reader. He has turned his obsessions and phobias into literature, taking a lot of care in the writing and the selection of characters and stories.” Care Santos, writer www.pontas-agency.com