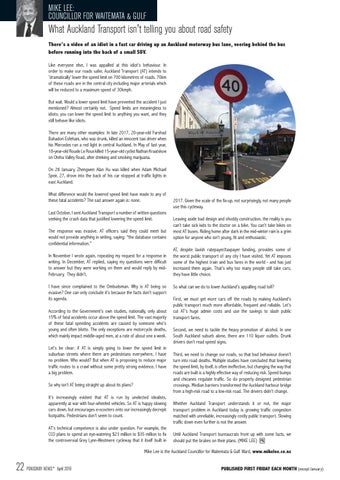 What Auckland Transport isn't telling you about road safety There’s a video of an idiot in a fast car driving up an Auckland motorway bus lane, veering behind the bus before running into the back of a small SUV. Like everyone else, I was appalled at this idiot’s behaviour. In order to make our roads safer, Auckland Transport (AT) intends to 'dramatically' lower the speed limit on 700 kilometres of roads. 70km of these roads are in the central city including major arterials which will be reduced to a maximum speed of 30kmph. But wait. Would a lower speed limit have prevented the accident I just mentioned? Almost certainly not. Speed limits are meaningless to idiots; you can lower the speed limit to anything you want, and they still behave like idiots. There are many other examples: In late 2017, 20-year-old Farshad Bahadori Esfehani, who was drunk, killed an innocent taxi driver when his Mercedes ran a red light in central Auckland. In May of last year, 18-year-old Rouxle Le Roux killed 15-year-old cyclist Nathan Kraatskow on Oteha Valley Road, after drinking and smoking marijuana. On 28 January, Zhengwen Alan Hu was killed when Adam Michael Speir, 27, drove into the back of his car stopped at traffic lights in east Auckland. What difference would the lowered speed limit have made to any of these fatal accidents? The sad answer again is: none. Last October, I sent Auckland Transport a number of written questions seeking the crash data that justified lowering the speed limit. The response was evasive. AT officers said they could meet but would not provide anything in writing, saying: “the database contains confidential information.” In November I wrote again, repeating my request for a response in writing. In December, AT replied, saying my questions were difficult to answer but they were working on them and would reply by midFebruary. They didn’t. I have since complained to the Ombudsman. Why is AT being so evasive? One can only conclude it’s because the facts don’t support its agenda. According to the Government’s own studies, nationally, only about 15% of fatal accidents occur above the speed limit. The vast majority of these fatal speeding accidents are caused by someone who’s young and often blotto. The only exceptions are motorcycle deaths, which mainly impact middle-aged men, at a rate of about one a week. Let’s be clear: if AT is simply going to lower the speed limit in suburban streets where there are pedestrians everywhere, I have no problem. Who would? But when AT is proposing to reduce major traffic routes to a crawl without some pretty strong evidence, I have a big problem. So why isn’t AT being straight up about its plans? It’s increasingly evident that AT is run by unelected idealists, apparently at war with four-wheeled vehicles. So AT is happy slowing cars down, but encourages e-scooters onto our increasingly decrepit footpaths. Pedestrians don’t seem to count. AT’s technical competence is also under question. For example, the CCO plans to spend an eye-watering $23 million to $35 million to fix the controversial Grey Lynn-Westmere cycleway that it itself built in

2017. Given the scale of the fix-up, not surprisingly, not many people use this cycleway. Leaving aside bad design and shoddy construction, the reality is you can’t take sick kids to the doctor on a bike. You can’t take bikes on most AT buses. Riding home after dark in the mid-winter rain is a grim option for anyone who isn’t young, fit and enthusiastic. AT, despite lavish ratepayer/taxpayer funding, provides some of the worst public transport of any city I have visited. Yet AT imposes some of the highest train and bus fares in the world - and has just increased them again. That’s why too many people still take cars; they have little choice. So what can we do to lower Auckland’s appalling road toll? First, we must get more cars off the roads by making Auckland’s public transport much more affordable, frequent and reliable. Let’s cut AT’s huge admin costs and use the savings to slash public transport fares. Second, we need to tackle the heavy promotion of alcohol. In one South Auckland suburb alone, there are 110 liquor outlets. Drunk drivers don’t read speed signs. Third, we need to change our roads, so that bad behaviour doesn’t turn into road deaths. Multiple studies have concluded that lowering the speed limit, by itself, is often ineffective, but changing the way that roads are built is a highly effective way of reducing risk. Speed bumps and chicanes regulate traffic. So do properly designed pedestrian crossings. Median barriers transformed the Auckland harbour bridge from a high-risk road to a low-risk road. The drivers didn't change. Whether Auckland Transport understands it or not, the major transport problem in Auckland today is growing traffic congestion matched with unreliable, increasingly costly public transport. Slowing traffic down even further is not the answer. Until Auckland Transport bureaucrats front up with some facts, we PN should put the brakes on their plans. (MIKE LEE) F 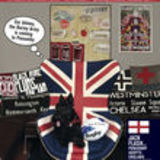 Ponsonby. Anyone not heard of us? We are Auckland's most-talked about part of town. Enjoy our April

Ponsonby. Anyone not heard of us? We are Auckland's most-talked about part of town. Enjoy our April