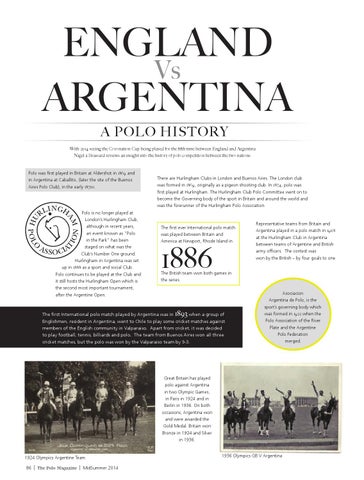 ENGLAND Vs ARGENTINA A POLO HISTORY With 2014 seeing the Coronation Cup being played for the ﬁfth time between England and Argentina Nigel à Brassard reviews an insight into the history of polo competition between the two nations.

olo wa r t layed in Britain at lder hot in 1869 and in Argentina at Caballito, (later the site of the Buenos Aires Polo Club), in the early 1870s.

Polo is no longer played at London’s Hurlingham Club, although in recent years, an event known as “Polo in the ark ha been staged on what was the Club’s Number One ground. Hurlingham in Argentina was set up in 1888 as a sport and social Club. Polo continues to be played at the Club and it still hosts the Hurlingham Open which is the second most important tournament, after the Argentine Open.

There are Hurlingham Clubs in London and Buenos Aires. The London club was formed in 1869, originally as a pigeon shooting club. In 1874, polo was r t layed at urlingha . he urlingha lub olo o ittee went on to beco e the o erning body of the ort in Britain and around the world and was the forerunner of the Hurlingham Polo Association.

Representative teams from Britain and Argentina played in a polo match in 1908 at the Hurlingham Club in Argentina between teams of Argentine and British ar y of cer . he conte t wa won by the British – by four goals to one.

he r t e er nternational olo atch was played between Britain and America at Newport, Rhode Island in

The British team won both games in the series. Asociacion Argentina de Polo, is the sport’s governing body which was formed in 1922 when the Polo Association of the River Plate and the Argentine olo ederation merged.

The ﬁrst International polo match played by Argentina was in when a group of Englishmen, resident in Argentina, went to Chile to play some cricket matches against members of the English community in Valparaiso. Apart from cricket, it was decided to play football, tennis, billiards and polo. The team from Buenos Aires won all three cricket matches, but the polo was won by the Valparaiso team by 9-3.

reat Britain ha layed polo against Argentina in two ly ic a e , in Paris in 1924 and in Berlin in 1936. On both occasions, Argentina won and were awarded the old edal. Britain won Bron e in and il er in 1936.