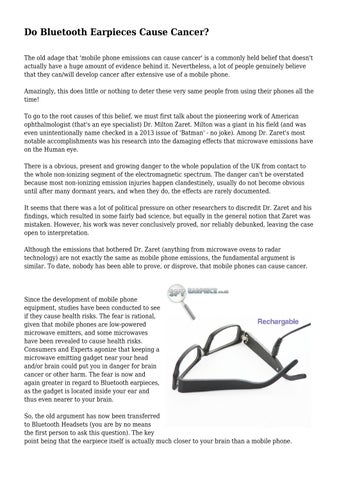 Do Bluetooth Earpieces Cause Cancer? The old adage that 'mobile phone emissions can cause cancer' is a commonly held belief that doesn't actually have a huge amount of evidence behind it. Nevertheless, a lot of people genuinely believe that they can/will develop cancer after extensive use of a mobile phone. Amazingly, this does little or nothing to deter these very same people from using their phones all the time! To go to the root causes of this belief, we must first talk about the pioneering work of American ophthalmologist (that's an eye specialist) Dr. Milton Zaret. Milton was a giant in his field (and was even unintentionally name checked in a 2013 issue of 'Batman' - no joke). Among Dr. Zaret's most notable accomplishments was his research into the damaging effects that microwave emissions have on the Human eye. There is a obvious, present and growing danger to the whole population of the UK from contact to the whole non-ionizing segment of the electromagnetic spectrum. The danger can't be overstated because most non-ionizing emission injuries happen clandestinely, usually do not become obvious until after many dormant years, and when they do, the effects are rarely documented. It seems that there was a lot of political pressure on other researchers to discredit Dr. Zaret and his findings, which resulted in some fairly bad science, but equally in the general notion that Zaret was mistaken. However, his work was never conclusively proved, nor reliably debunked, leaving the case open to interpretation. Although the emissions that bothered Dr. Zaret (anything from microwave ovens to radar technology) are not exactly the same as mobile phone emissions, the fundamental argument is similar. To date, nobody has been able to prove, or disprove, that mobile phones can cause cancer.

Since the development of mobile phone equipment, studies have been conducted to see if they cause health risks. The fear is rational, given that mobile phones are low-powered microwave emitters, and some microwaves have been revealed to cause health risks. Consumers and Experts agonize that keeping a microwave emitting gadget near your head and/or brain could put you in danger for brain cancer or other harm. The fear is now and again greater in regard to Bluetooth earpieces, as the gadget is located inside your ear and thus even nearer to your brain. So, the old argument has now been transferred to Bluetooth Headsets (you are by no means the first person to ask this question). The key point being that the earpiece itself is actually much closer to your brain than a mobile phone.

However, naysayers simply consider the level of microwave emission produced by the earpiece to be so low as to render the effects negligible. Essentially, because the widespread use of mobile phones is a relatively recent phenomenon (although it must be said that the first mobile call was actually placed 41 years ago by Marty Cooper), it is simply too early to tell, one way or the other. Because Bluetooth earpieces are such a new facet, it is not possible to get statistics about continuing effects of constant contact. Some propose that inside 20 years, advanced studies will be presented, as the first generation to grow up using mobile phones and earpieces will in fact be guinea pigs for lasting effects. If you are really worried about the microwave emission from your mobile phone, don't use Bluetooth earpieces and simply use the speaker-phone alternative that is standard on most Mobile phones. even though exact study has not provided comprehensible solutions as to whether Bluetooth earpieces can result in cancer, this may be an area where you feel it is better to be safe than sorry.

In conclusion, it does seem unlikely thatyour mobile phone can give you cancer. It seems logical enough to assume that we'd all be feeling the effects by now, after nearly two decades of mobile phone use (the second of which actually involved the majority of the population). However, nobody really knows for sure... Dr. Zaret may yet be proven right as the prophet of doom (but, of course, we have to hope not). Do Bluetooth Earpieces Cause Cancer?

Do Bluetooth Earpieces Cause Cancer?