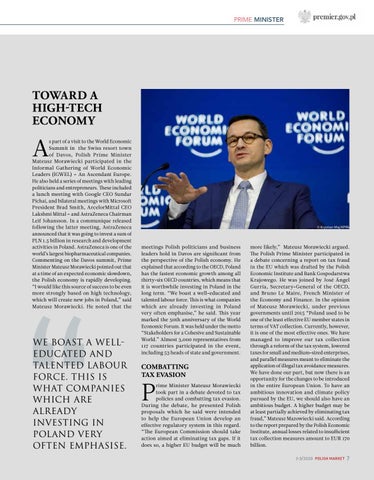 TOWARD A HIGH-TECH ECONOMY

s part of a visit to the World Economic Summit in the Swiss resort town of Davos, Polish Prime Minister Mateusz Morawiecki participated in the Informal Gathering of World Economic Leaders (IGWEL) – An Ascendant Europe. He also held a series of meetings with leading politicians and entrepreneurs. These included a lunch meeting with Google CEO Sundar Pichai, and bilateral meetings with Microsoft President Brad Smith, ArcelorMittal CEO Lakshmi Mittal – and AstraZeneca Chairman Leif Johansson. In a communique released following the latter meeting, AstraZeneca announced that it was going to invest a sum of PLN 1.5 billion in research and development activities in Poland. AstraZeneca is one of the world’s largest biopharmaceutical companies. Commenting on the Davos summit, Prime Minister Mateusz Morawiecki pointed out that at a time of an expected economic slowdown, the Polish economy is rapidly developing. “I would like this source of success to be even more strongly based on high technology, which will create new jobs in Poland,” said Mateusz Morawiecki. He noted that the

WE BOAST A WELLEDUCATED AND TALENTED LABOUR FORCE. THIS IS WHAT COMPANIES WHICH ARE ALREADY INVESTING IN POLAND VERY OFTEN EMPHASISE.

meetings Polish politicians and business leaders hold in Davos are significant from the perspective of the Polish economy. He explained that according to the OECD, Poland has the fastest economic growth among all thirty-six OECD countries, which means that it is worthwhile investing in Poland in the long term. “We boast a well-educated and talented labour force. This is what companies which are already investing in Poland very often emphasise,” he said. This year marked the 50th anniversary of the World Economic Forum. It was held under the motto “Stakeholders for a Cohesive and Sustainable World.” Almost 3,000 representatives from 117 countries participated in the event, including 53 heads of state and government.

rime Minister Mateusz Morawiecki took part in a debate devoted to tax policies and combatting tax evasion. During the debate, he presented Polish proposals which he said were intended to help the European Union develop an effective regulatory system in this regard. “The European Commission should take action aimed at eliminating tax gaps. If it does so, a higher EU budget will be much

more likely,” Mateusz Morawiecki argued. The Polish Prime Minister participated in a debate concerning a report on tax fraud in the EU which was drafted by the Polish Economic Institute and Bank Gospodarstwa Krajowego. He was joined by José Ángel Gurría, Secretary-General of the OECD, and Bruno Le Maire, French Minister of the Economy and Finance. In the opinion of Mateusz Morawiecki, under previous governments until 2015 “Poland used to be one of the least effective EU member states in terms of VAT collection. Currently, however, it is one of the most effective ones. We have managed to improve our tax collection through a reform of the tax system, lowered taxes for small and medium-sized enterprises, and parallel measures meant to eliminate the application of illegal tax avoidance measures. We have done our part, but now there is an opportunity for the changes to be introduced in the entire European Union. To have an ambitious innovation and climate policy pursued by the EU, we should also have an ambitious budget. A higher budget may be at least partially achieved by eliminating tax fraud,” Mateusz Mazowiecki said. According to the report prepared by the Polish Economic Institute, annual losses related to insufficient tax collection measures amount to EUR 170 billion. 2-3/2020 polish market