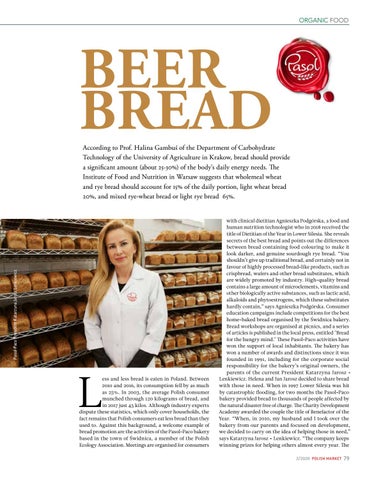 According to Prof. Halina Gambuś of the Department of Carbohydrate Technology of the University of Agriculture in Krakow, bread should provide a significant amount (about 25-30%) of the body's daily energy needs. The Institute of Food and Nutrition in Warsaw suggests that wholemeal wheat and rye bread should account for 15% of the daily portion, light wheat bread 20%, and mixed rye-wheat bread or light rye bread 65%.

ess and less bread is eaten in Poland. Between 2010 and 2016, its consumption fell by as much as 25%. In 2003, the average Polish consumer munched through 120 kilograms of bread, and in 2017 just 45 kilos. Although industry experts dispute these statistics, which only cover households, the fact remains that Polish consumers eat less bread than they used to. Against this background, a welcome example of bread promotion are the activities of the Pasol-Paco bakery based in the town of Świdnica, a member of the Polish Ecology Association. Meetings are organised for consumers

with clinical dietitian Agnieszka Podgórska, a food and human nutrition technologist who in 2018 received the title of Dietitian of the Year in Lower Silesia. She reveals secrets of the best bread and points out the differences between bread containing food colouring to make it look darker, and genuine sourdough rye bread. “You shouldn’t give up traditional bread, and certainly not in favour of highly processed bread-like products, such as crispbread, wafers and other bread substitutes, which are widely promoted by industry. High-quality bread contains a large amount of microelements, vitamins and other biologically active substances, such as lactic acid, alkaloids and phytoestrogens, which these substitutes hardly contain,” says Agnieszka Podgórska. Consumer education campaigns include competitions for the best home-baked bread organised by the Świdnica bakery. Bread workshops are organised at picnics, and a series of articles is published in the local press, entitled "Bread for the hungry mind." These Pasol-Paco activities have won the support of local inhabitants. The bakery has won a number of awards and distinctions since it was founded in 1991, including for the corporate social responsibility for the bakery’s original owners, the parents of the current President Katarzyna Jarosz Lenkiewicz. Helena and Jan Jarosz decided to share bread with those in need. When in 1997 Lower Silesia was hit by catastrophic flooding, for two months the Pasol-Paco bakery provided bread to thousands of people affected by the natural disaster free of charge. The Charity Development Academy awarded the couple the title of Benefactor of the Year. “When, in 2010, my husband and I took over the bakery from our parents and focused on development, we decided to carry on the idea of helping those in need,” says Katarzyna Jarosz – Lenkiewicz. “The company keeps winning prizes for helping others almost every year. The 2/2020 polish market