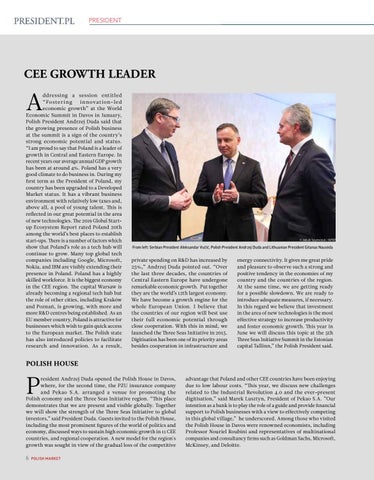 ddressing a session entitled “Fo s t e r i n g i n n ova t i o n-l e d economic growth” at the World Economic Summit in Davos in January, Polish President Andrzej Duda said that the growing presence of Polish business at the summit is a sign of the country’s strong economic potential and status. “I am proud to say that Poland is a leader of growth in Central and Eastern Europe. In recent years our average annual GDP growth has been at around 4%. Poland has a very good climate to do business in. During my first term as the President of Poland, my country has been upgraded to a Developed Market status. It has a vibrant business environment with relatively low taxes and, above all, a pool of young talent. This is reflected in our great potential in the area of new technologies. The 2019 Global Startup Ecosystem Report rated Poland 20th among the world’s best places to establish start-ups. There is a number of factors which show that Poland’s role as a tech hub will continue to grow. Many top global tech companies including Google, Microsoft, Nokia, and IBM are visibly extending their presence in Poland. Poland has a highly skilled workforce. It is the biggest economy in the CEE region. The capital Warsaw is already becoming a regional tech hub but the role of other cities, including Kraków and Poznań, is growing, with more and more R&D centres being established. As an EU member country, Poland is attractive for businesses which wish to gain quick access to the European market. The Polish state has also introduced policies to facilitate research and innovation. As a result,

private spending on R&D has increased by 25%,” Andrzej Duda pointed out. “Over the last three decades, the countries of Central Eastern Europe have undergone remarkable economic growth. Put together they are the world’s 12th largest economy. We have become a growth engine for the whole European Union. I believe that the countries of our region will best use their full economic potential through close cooperation. With this in mind, we launched the Three Seas Initiative in 2015. Digitisation has been one of its priority areas besides cooperation in infrastructure and

energy connectivity. It gives me great pride and pleasure to observe such a strong and positive tendency in the economies of my country and the countries of the region. At the same time, we are getting ready for a possible slowdown. We are ready to introduce adequate measures, if necessary. In this regard we believe that investment in the area of new technologies is the most effective strategy to increase productivity and foster economic growth. This year in June we will discuss this topic at the 5th Three Seas Initiative Summit in the Estonian capital Tallinn,” the Polish President said.

resident Andrzej Duda opened the Polish House in Davos, where, for the second time, the PZU insurance company and Pekao S.A. arranged a venue for promoting the Polish economy and the Three Seas Initiative region. “This place demonstrates that we are present and visible globally. Together we will show the strength of the Three Seas Initiative to global investors,” said President Duda. Guests invited to the Polish House, including the most prominent figures of the world of politics and economy, discussed ways to sustain high economic growth in 11 CEE countries, and regional cooperation. A new model for the region's growth was sought in view of the gradual loss of the competitive

advantage that Poland and other CEE countries have been enjoying due to low labour costs. “This year, we discuss new challenges related to the Industrial Revolution 4.0 and the ever-present digitisation,” said Marek Lusztyn, President of Pekao S.A. ”Our intention as a bank is to play the role of a guide and provide financial support to Polish businesses with a view to effectively competing in this global village,” he underscored. Among those who visited the Polish House in Davos were renowned economists, including Professor Nouriel Roubini and representatives of multinational companies and consultancy firms such as Goldman Sachs, Microsoft, McKinsey, and Deloitte.