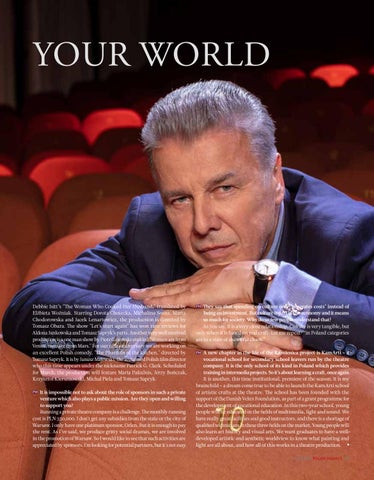 Debbie Isitt’s "The Woman Who Cooked Her Husband," translated by Elżbieta Woźniak. Starring Dorota Chotecka, Michalina Sosna, Marta Chodorowska and Jacek Lenartowicz, the production is directed by Tomasz Obara. The show "Let's start again" has won rave reviews for Aldona Jankowska and Tomasz Sapryk’s parts. Another very well received production is a one man show by Piotr Gąsowski entitled "Women are from Venus, men are from Mars." For our 11th anniversary we are working on an excellent Polish comedy, "The Phantom of the kitchen," directed by Tomasz Sapryk. It is by Janusz Majewski, the acclaimed Polish film director who this time appears under the nickname Patrick G. Clark. Scheduled for March, the production will feature Maria Pakulnis, Jerzy Bończak, Krzysztof Kiersznowski, Michał Piela and Tomasz Sapryk. It is impossible not to ask about the role of sponsors in such a private venture which also plays a public mission. Are they open and willing to support you? Running a private theatre company is a challenge. The monthly running cost is PLN 350,000. I don't get any subsidies from the state or the city of Warsaw. I only have one platinum sponsor, Orlen. But it is enough to pay the rent. As I’ve said, we produce gritty social dramas, we are involved in the promotion of Warsaw. So I would like to see that such activities are appreciated by sponsors. I'm looking for potential partners, but it's not easy. PM

They say that spending on culture only "generates costs" instead of being an investment. But culture is part of the economy and it means so much for society. Why do so few people understand that? As you say, it is a very close relationship. Culture is very tangible, but only when it is based on real craft. Let me repeat: “in Poland categories are in a state of shameful chaos.” PM

A new chapter in the life of the Kamienica project is KamArti - a vocational school for secondary school leavers run by the theatre company. It is the only school of its kind in Poland which provides training in intermedia projects. So it’s about learning a craft, once again. It is another, this time institutional, premiere of the season. It is my brainchild - a dream come true to be able to launch the KamArti school of artistic crafts at the theatre. The school has been founded with the support of the Danish Velux Foundation, as part of a grant programme for the development of vocational education. In this two-year school, young people will be educated in the fields of multimedia, light and sound. We have really great facilities and good instructors, and there is a shortage of qualified technicians in these three fields on the market. Young people will also learn art history and visual arts. We want graduates to have a welldeveloped artistic and aesthetic worldview to know what painting and light are all about, and how all of this works in a theatre production. • PM