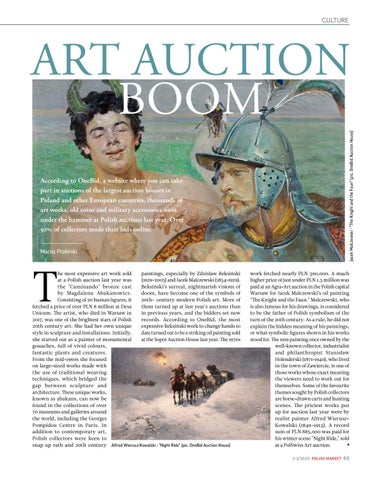 ART AUCTION BOOM According to OneBid, a website where you can take part in auctions of the largest auction houses in Poland and other European countries, thousands of art works, old coins and military accessories went under the hammer at Polish auctions last year. Over 30% of collectors made their bids online. Maciej Proliński

he most expensive art work sold paintings, especially by Zdzisław Beksiński at a Polish auction last year was (1929-2005) and Jacek Malczewski (1854-1929). the "Caminando" bronze cast Beksiński’s surreal, nightmarish visions of doom, have become one of the symbols of by Magdalena Abakanowicz. Consisting of 20 human figures, it 20th- century modern Polish art. More of fetched a price of over PLN 8 million at Desa them turned up at last year's auctions than Unicum. The artist, who died in Warsaw in in previous years, and the bidders set new 2017, was one of the brightest stars of Polish records. According to OneBid, the most 20th century art. She had her own unique expensive Beksiński work to change hands to style in sculpture and installations. Initially, date turned out to be a striking oil painting sold she started out as a painter of monumental at the Sopot Auction House last year. The 1970s gouaches, full of vivid colours, fantastic plants and creatures. From the mid-1960s she focused on large-sized works made with the use of traditional weaving techniques, which bridged the gap between sculpture and architecture. These unique works, known as abakans, can now be found in the collections of over 70 museums and galleries around the world, including the Georges Pompidou Centre in Paris. In addition to contemporary art, Polish collectors were keen to snap up 19th and 20th century Alfred Wierusz-Kowalski - "Night Ride" (pic. OneBid Auction House)

work fetched nearly PLN 390,000. A much higher price of just under PLN 1.5 million was paid at an Agra-Art auction in the Polish capital Warsaw for Jacek Malczewski’s oil painting "The Knight and the Faun." Malczewski, who is also famous for his drawings, is considered to be the father of Polish symbolism of the turn of the 20th century. As a rule, he did not explain the hidden meaning of his paintings, or what symbolic figures shown in his works stood for. The 1919 painting once owned by the well-known collector, industrialist and philanthropist Stanisław Holenderski (1871-1940), who lived in the town of Zawiercie, is one of those works whose exact meaning the viewers need to work out for themselves. Some of the favourite themes sought by Polish collectors are horse-drawn carts and hunting scenes. The priciest works put up for auction last year were by realist painter Alfred WieruszKowalski (1849-1915). A record sum of PLN 885,000 was paid for his winter scene "Night Ride," sold at a PolSwiss Art auction. • 2-3/2020 polish market