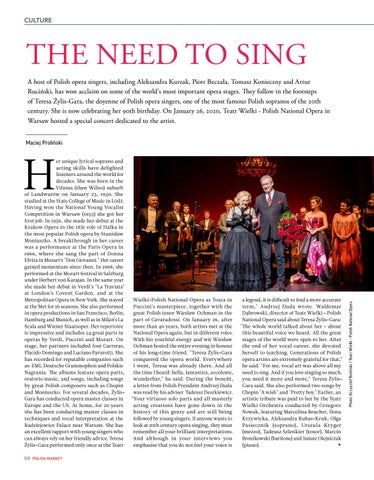 THE NEED TO SING A host of Polish opera singers, including Aleksandra Kurzak, Piotr Beczała, Tomasz Konieczny and Artur Ruciński, has won acclaim on some of the world’s most important opera stages. They follow in the footsteps of Teresa Żylis-Gara, the doyenne of Polish opera singers, one of the most famous Polish sopranos of the 20th century. She is now celebrating her 90th birthday. On January 26, 2020, Teatr Wielki - Polish National Opera in Warsaw hosted a special concert dedicated to the artist. Maciej Proliński

Wielki-Polish National Opera as Tosca in Puccini's masterpiece, together with the great Polish tenor Wiesław Ochman in the part of Cavaradossi. On January 26, after more than 40 years, both artists met at the National Opera again, but in different roles. With his youthful energy and wit Wiesław Ochman hosted the entire evening in honour of his long-time friend. "Teresa Żylis-Gara conquered the opera world. Everywhere I went, Teresa was already there. And all the time I heard: bella, fantastica, eccelente, wunderbar," he said. During the benefit, a letter from Polish President Andrzej Duda was read by his adviser Tadeusz Deszkiewicz. "Your virtuoso solo parts and all masterly acting creations have gone down in the history of this genre and are still being followed by young singers. If anyone wants to look at 20th century opera singing, they must remember all your brilliant interpretations. And although in your interviews you emphasise that you do not feel your voice is

a legend, it is difficult to find a more accurate term," Andrzej Duda wrote. Waldemar Dąbrowski, director of Teatr Wielki - Polish National Opera said about Teresa Żylis-Gara: "The whole world talked about her - about this beautiful voice we heard. All the great stages of the world were open to her. After the end of her vocal career, she devoted herself to teaching. Generations of Polish opera artists are extremely grateful for that," he said. "For me, vocal art was above all my need to sing. And if you love singing so much, you need it more and more," Teresa ŻylisGara said. She also performed two songs by Chopin "A wish" and "Pretty boy." Earlier, an artistic tribute was paid to her by the Teatr Wielki Orchestra conducted by Grzegorz Nowak, featuring Marcelina Beucher, Ilona Krzywicka, Aleksandra Kubas-Kruk, Olga Pasiecznik (soprano), Urszula Kryger (mezzo), Tadeusz Szlenkier (tenor), Marcin Bronikowski (baritone) and Janusz Olejniczak (piano). •

er unique lyrical soprano and acting skills have delighted listeners around the world for decades. She was born in the Vilnius (then Wilno) suburb of Landwarów on January 23, 1930. She studied at the State College of Music in Łódź. Having won the National Young Vocalist Competition in Warsaw (1953) she got her first job. In 1956, she made her debut at the Krakow Opera in the title role of Halka in the most popular Polish opera by Stanisław Moniuszko. A breakthrough in her career was a performance at the Paris Opera in 1966, where she sang the part of Donna Elvira in Mozart's "Don Giovanni." Her career gained momentum since then. In 1968, she performed at the Mozart festival in Salzburg under Herbert von Karajan. In the same year she made her debut in Verdi's "La Traviata" at London’s Covent Garden, and at the Metropolitan Opera in New York. She stayed at the Met for 16 seasons. She also performed in opera productions in San Francisco, Berlin, Hamburg and Munich, as well as in Milan's La Scala and Wiener Staatsoper. Her repertoire is impressive and includes 24 great parts in operas by Verdi, Puccini and Mozart. On stage, her partners included José Carreras, Placido Domingo and Luciano Pavarotti. She has recorded for reputable companies such as: EMI, Deutsche Grammophon and Polskie Nagrania. The albums feature opera parts, oratorio music, and songs, including songs by great Polish composers such as Chopin and Moniuszko. For several decades, ŻylisGara has conducted opera master classes in Europe and the US. At home, for 20 years she has been conducting master classes in techniques and vocal interpretation at the Radziejowice Palace near Warsaw. She has an excellent rapport with young singers who can always rely on her friendly advice. Teresa Żylis-Gara performed only once at the Teatr