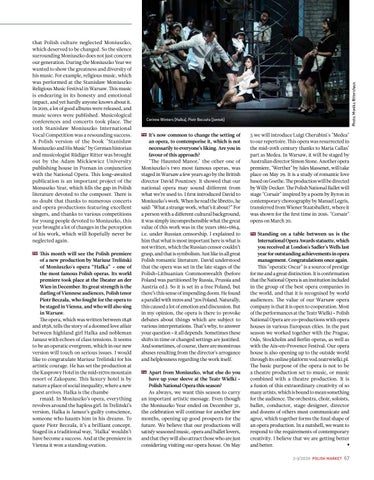 that Polish culture neglected Moniuszko, which deserved to be changed. So the silence surrounding Moniuszko does not just concern our generation. During the Moniuszko Year we wanted to show the greatness and diversity of his music. For example, religious music, which was performed at the Stanisław Moniuszko Religious Music Festival in Warsaw. This music is endearing in its honesty and emotional impact, and yet hardly anyone knows about it. In 2019, a lot of good albums were released, and music scores were published. Musicological conferences and concerts took place. The 10th Stanisław Moniuszko International Vocal Competition was a resounding success. A Polish version of the book "Stanisław Moniuszko and His Music" by German historian and musicologist Rüdiger Ritter was brought out by the Adam Mickiewicz University publishing house in Poznan in conjunction with the National Opera. This long-awaited publication is an important project of the Monuszko Year, which fills the gap in Polish literature devoted to the composer. There is no doubt that thanks to numerous concerts and opera productions featuring excellent singers, and thanks to various competitions for young people devoted to Moniuszko, this year brought a lot of changes in the perception of his work, which will hopefully never be neglected again. This month will see the Polish premiere of a new production by Mariusz Treliński of Moniuszko's opera “Halka” - one of the most famous Polish operas. Its world premiere took place at the Theater an der Wien in December. Its great strength is the darling of Viennese audiences, Polish tenor Piotr Beczała, who fought for the opera to be staged in Vienna, and who will also sing in Warsaw. The opera, which was written between 1848 and 1858, tells the story of a doomed love affair between highland girl Halka and nobleman Janusz with echoes of class tensions. It seems to be an operatic evergreen, which in our new version will touch on serious issues. I would like to congratulate Mariusz Treliński for his artistic courage. He has set the production at the Kasprowy Hotel in the mid-1970s mountain resort of Zakopane. This luxury hotel is by nature a place of social inequality, where a new guest arrives. Halka is the chambe rmaid. In Moniuszko’s opera, everything revolves around the hapless girl. In Treliński’s version, Halka is Janusz’s guilty conscience, someone who haunts him in his dreams. To quote Piotr Beczała, it’s a brilliant concept. Staged in a traditional way, "Halka" wouldn’t have become a success. And at the premiere in Vienna it won a standing ovation. PM

It’s now common to change the setting of an opera, to contemporise it, which is not necessarily to everyone’s liking. Are you in favour of this approach? "The Haunted Manor," the other one of Moniuszko's two most famous operas, was staged in Warsaw a few years ago by the British director David Pountney. It showed that our national opera may sound different from what we’re used to. I first introduced David to Moniuszko’s work. When he read the libretto, he said: "What a strange work, what’s it about?” For a person with a different cultural background, it was simply incomprehensible what the great value of this work was in the years 1861–1864, i.e. under Russian censorship. I explained to him that what is most important here is what is not written, which the Russian censor couldn’t grasp, and that is symbolism. Just like in all great Polish romantic literature. David understood that the opera was set in the late stages of the Polish-Lithuanian Commonwealth (before Poland was partitioned by Russia, Prussia and Austria ed.). So it is set in a free Poland, but there’s this sense of impending doom. He found a parallel with 1920s and ‘30s Poland. Naturally, this caused a lot of emotion and discussion. But in my opinion, the opera is there to provoke debates about things which are subject to various interpretations. That’s why, to answer your question - it all depends. Sometimes these shifts in time or changed settings are justified. And sometimes, of course, there are monstrous abuses resulting from the director's arrogance and helplessness regarding the work itself. PM

Apart from Moniuszko, what else do you have up your sleeve at the Teatr Wielki Polish National Opera this season? As always, we want this season to carry an important artistic message. Even though the Moniuszko Year ended on December 31, the celebration will continue for another few months, opening up good prospects for the future. We believe that our productions will satisfy seasoned music, opera and ballet lovers, and that they will also attract those who are just considering visiting our opera house. On May PM

5 we will introduce Luigi Cherubini's "Medea" to our repertoire. This opera was resurrected in the mid-20th century thanks to Maria Callas’ part as Medea. In Warsaw, it will be staged by Australian director Simon Stone. Another opera premiere, "Werther" by Jules Massenet, will take place on May 29. It is a study of romantic love based on Goethe. The production will be directed by Willy Decker. The Polish National Ballet will stage "Corsair" inspired by a poem by Byron in contemporary choreography by Manuel Legris, transferred from Wiener Staatsballett, where it was shown for the first time in 2016. "Corsair" opens on March 20. Standing on a table between us is the International Opera Awards statuette, which you received at London's Sadler’s Wells last year for outstanding achievements in opera management. Congratulations once again. This "operatic Oscar" is a source of prestige for me and a great distinction. It is confirmation that the National Opera is an institution included in the group of the best opera companies in the world, and that it is recognised by world audiences. The value of our Warsaw opera company is that it is open to cooperation. Most of the performances at the Teatr Wielki - Polish National Opera are co-productions with opera houses in various European cities. In the past season we worked together with the Prague, Oslo, Stockholm and Berlin operas, as well as with the Aix-en-Provence Festival. Our opera house is also opening up to the outside world through its online platform vod.teatrwielki.pl. The basic purpose of the opera is not to be a theatre production set to music, or music combined with a theatre production. It is a fusion of this extraordinary creativity of so many artists, which is bound to mean something for the audience. The orchestra, choir, soloists, ballet, conductor, stage designer, director and dozens of others must communicate and agree, which together forms the final shape of an opera production. In a nutshell, we want to respond to the requirements of contemporary creativity. I believe that we are getting better • and better. PM