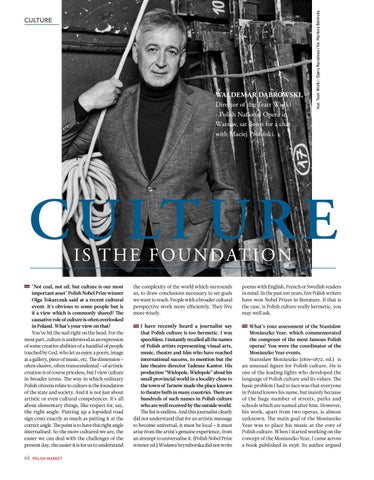 WALDEMAR DĄBROWSKI, Director of the Teatr Wielki - Polish National Opera in Warsaw, sat down for a chat with Maciej Proliński.

"Not coal, not oil, but culture is our most important asset" Polish Nobel Prize winner Olga Tokarczuk said at a recent cultural event. It's obvious to some people but is it a view which is commonly shared? The causative role of culture is often overlooked in Poland. What’s your view on that? You’ve hit the nail right on the head. For the most part, culture is understood as an expression of some creative abilities of a handful of people touched by God, who let us enjoy a poem, image at a gallery, piece of music, etc. The dimension often elusive, often transcendental - of artistic creation is of course priceless, but I view culture in broader terms. The way in which ordinary Polish citizens relate to culture is the foundation of the state and society. And it is not just about artistic or even cultural competences. It's all about elementary things, like respect for, say, the right angle. Putting up a lopsided road sign costs exactly as much as putting it at the correct angle. The point is to have this right angle internalised. So the more cultured we are, the easier we can deal with the challenges of the present day, the easier it is for us to understand PM

the complexity of the world which surrounds us, to draw conclusions necessary to set goals we want to reach. People with a broader cultural perspective work more efficiently. They live more wisely.

poems with English, French or Swedish readers in mind. In the past 100 years, five Polish writers have won Nobel Prizes in literature. If that is the case, is Polish culture really hermetic, you may well ask.

I have recently heard a journalist say that Polish culture is too hermetic. I was speechless. I instantly recalled all the names of Polish artists representing visual arts, music, theatre and film who have reached international success, to mention but the late theatre director Tadeusz Kantor. His production “Wielopole, Wielopole” about his small provincial world in a locality close to the town of Tarnów made the place known to theatre buffs in many countries. There are hundreds of such names in Polish culture who are well received by the outside world. The list is endless. And this journalist clearly did not understand that for an artistic message to become universal, it must be local - it must arise from the artist's genuine experience, from an attempt to universalise it. (Polish Nobel Prize winner ed.) Wisława Szymborska did not write