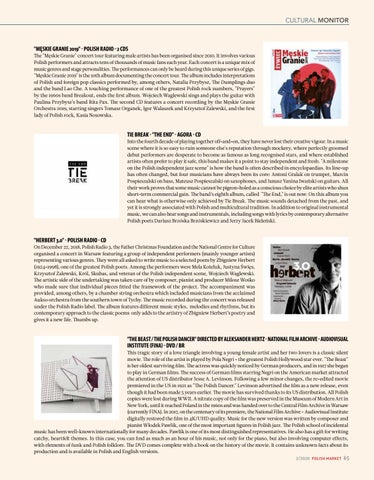 "MĘSKIE GRANIE 2019" - POLISH RADIO - 2 CDS The "Męskie Granie" concert tour featuring male artists has been organised since 2010. It involves various Polish performers and attracts tens of thousands of music fans each year. Each concert is a unique mix of music genres and stage personalities. The performances can only be heard during this unique series of gigs. "Męskie Granie 2019" is the 10th album documenting the concert tour. The album includes interpretations of Polish and foreign pop classics performed by, among others, Natalia Przybysz, The Dumplings duo and the band Lao Che. A touching performance of one of the greatest Polish rock numbers, "Prayers" by the 1960s band Breakout, ends the first album. Wojciech Waglewski sings and plays the guitar with Paulina Przybysz’s band Rita Pax. The second CD features a concert recording by the Męskie Granie Orchestra 2019, starring singers Tomasz Organek, Igor Walaszek and Krzysztof Zalewski, and the first lady of Polish rock, Kasia Nosowska.

TIE BREAK - "THE END" - AGORA - CD Into the fourth decade of playing together off-and-on, they have never lost their creative vigour. In a music scene where it is so easy to ruin someone else's reputation through mockery, where perfectly groomed debut performers are desperate to become as famous as long recognised stars, and where established artists often prefer to play it safe, this band makes it a point to stay independent and fresh. "A milestone on the Polish independent jazz scene" is how the band is often described in encyclopaedias. Its line-up has often changed, but four musicians have always been its core: Antoni Gralak on trumpet, Marcin Pospieszalski on bass, Mateusz Pospieszalski on saxophones, and Janusz Yanina Iwański on guitars. All their work proves that some music cannot be pigeon-holed as a conscious choice by elite artists who shun short-term commercial gain. The band's eighth album, called "The End," is out now. On this album you can hear what is otherwise only achieved by Tie Break. The music sounds detached from the past, and yet it is strongly associated with Polish and multicultural tradition. In addition to original instrumental music, we can also hear songs and instrumentals, including songs with lyrics by contemporary alternative Polish poets Dariusz Brzóska Brzóskiewicz and Jerzy Jacek Bieleński.

"HERBERT 3.0" - POLISH RADIO - CD On December 22, 2018, Polish Radio 3, the Father Christmas Foundation and the National Centre for Culture organised a concert in Warsaw featuring a group of independent performers (mainly younger artists) representing various genres. They were all asked to write music to a selected poem by Zbigniew Herbert (1924-1998), one of the greatest Polish poets. Among the performers were Mela Koteluk, Justyna Święs, Krzysztof Zalewski, Król, Skubas, and veteran of the Polish independent scene, Wojciech Waglewski. The artistic side of the undertaking was taken care of by composer, pianist and producer Miłosz Wośko who made sure that individual pieces fitted the framework of the project. The accompaniment was provided, among others, by a chamber string orchestra which included musicians from the acclaimed Aukso orchestra from the southern town of Tychy. The music recorded during the concert was released under the Polish Radio label. The album features different music styles, melodies and rhythms, but its contemporary approach to the classic poems only adds to the artistry of Zbigniew Herbert’s poetry and gives it a new life. Thumbs up.

"THE BEAST / THE POLISH DANCER" DIRECTED BY ALEKSANDER HERTZ - NATIONAL FILM ARCHIVE - AUDIOVISUAL INSTITUTE (FINA) - DVD / BR This tragic story of a love triangle involving a young female artist and her two lovers is a classic silent movie. The role of the artist is played by Pola Negri - the greatest Polish Hollywood star ever. "The Beast" is her oldest surviving film. The actress was quickly noticed by German producers, and in 1917 she began to play in German films. The success of German films starring Negri on the American market attracted the attention of US distributor Jesse A. Levinson. Following a few minor changes, the re-edited movie premiered in the US in 1921 as "The Polish Dancer." Levinson advertised the film as a new release, even though it had been made 5 years earlier. The movie has survived thanks to its US distribution. All Polish copies were lost during WWII. A nitrate copy of the film was preserved in the Museum of Modern Art in New York, until it reached Poland in the 1960s and was handed over to the Central Film Archive in Warsaw (currently FINA). In 2017, on the centenary of its premiere, the National Film Archive - Audiovisual Institute digitally restored the film in 4K/UHD quality. Music for the new version was written by composer and pianist Włodek Pawlik, one of the most important figures in Polish jazz. The Polish school of incidental music has been well-known internationally for many decades. Pawlik is one of its most distinguished representatives. He also has a gift for writing catchy, heartfelt themes. In this case, you can find as much as an hour of his music, not only for the piano, but also involving computer effects, with elements of funk and Polish folklore. The DVD comes complete with a book on the history of the movie. It contains unknown facts about its production and is available in Polish and English versions. 2/2020 polish market