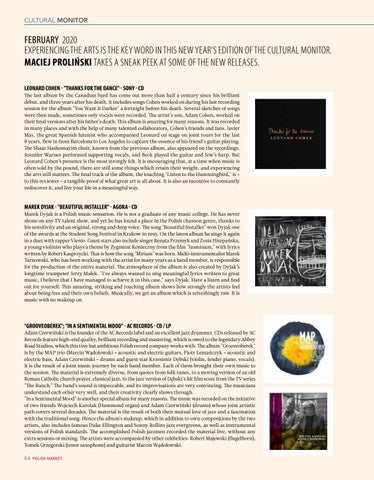 FEBRUARY 2020 EXPERIENCING THE ARTS IS THE KEY WORD IN THIS NEW YEAR'S EDITION OF THE CULTURAL MONITOR. MACIEJ PROLIŃSKI TAKES A SNEAK PEEK AT SOME OF THE NEW RELEASES. LEONARD COHEN - "THANKS FOR THE DANCE" - SONY - CD The last album by the Canadian bard has come out more than half a century since his brilliant debut, and three years after his death. It includes songs Cohen worked on during his last recording session for the album "You Want It Darker" a fortnight before his death. Several sketches of songs were then made, sometimes only vocals were recorded. The artist’s son, Adam Cohen, worked on their final versions after his father’s death. This album is amazing for many reasons. It was recorded in many places and with the help of many talented collaborators, Cohen’s friends and fans. Javier Mas, the great Spanish lutenist who accompanied Leonard on stage on joint tours for the last 8 years, flew in from Barcelona to Los Angeles to capture the essence of his friend's guitar playing. The Shaar Hashomayim choir, known from the previous album, also appeared on the recordings. Jennifer Warnes performed supporting vocals, and Beck played the guitar and Jew’s harp. But Leonard Cohen’s presence is the most strongly felt. It is encouraging that, at a time when music is often sold by the pound, there are still some things which retain their weight, and experiencing the arts still matters. The final track of the album, the touching "Listen to the Hummingbird," is to this reviewer - a tangible proof of what great art is all about. It is also an incentive to constantly rediscover it, and live your life in a meaningful way.

MAREK DYJAK - "BEAUTIFUL INSTALLER" - AGORA - CD Marek Dyjak is a Polish music sensation. He is not a graduate of any music college. He has never shone on any TV talent show, and yet he has found a place in the Polish chanson genre, thanks to his sensitivity and an original, strong and deep voice. The song "Beautiful Installer" won Dyjak one of the awards at the Student Song Festival in Krakow in 1995. On the latest album he sings it again in a duet with rapper Vienio. Guest stars also include singer Renata Przemyk and Zosia Hiszpańska, a young violinist who plays a theme by Zygmunt Konieczny from the film "Jasminum," with lyrics written by Robert Kasprzycki. That is how the song "Miriam" was born. Multi-instrumentalist Marek Tarnowski, who has been working with the artist for many years as a band member, is responsible for the production of the entire material. The atmosphere of the album is also created by Dyjak’s longtime trumpeter Jerzy Małek. "I've always wanted to sing meaningful lyrics written to great music, I believe that I have managed to achieve it in this case," says Dyjak. Have a listen and find out for yourself. This amazing, striking and touching album shows how strongly the artists feel about being free and their own beliefs. Musically, we get an album which is refreshingly raw. It is music with no makeup on.

"GROOVEOBEREK"; "IN A SENTIMENTAL MOOD" - AC RECORDS - CD / LP Adam Czerwiński is the founder of the AC Records label and an excellent jazz drummer. CDs released by AC Records feature high-end quality, brilliant recording and mastering, which is owed to the legendary Abbey Road Studios, which this tiny but ambitious Polish record company works with. The album "Grooveoberek" is by the MAP trio (Marcin Wądołowski - acoustic and electric guitars, Piotr Lemańczyk - acoustic and electric bass, Adam Czerwiński - drums and guest star Krzesimir Dębski (violin, fender piano, vocals). It is the result of a joint music journey by each band member. Each of them brought their own music to the session. The material is extremely diverse, from quotes from folk tunes, to a moving version of an old Roman Catholic church prayer, classical jazz, to the jazz version of Dębski's hit film score from the TV series "The Ranch." The band’s sound is impeccable, and its improvisations are very convincing. The musicians understand each other very well, and their creativity clearly shows through. "In a Sentimental Mood" is another special album for many reasons. The music was recorded on the initiative of two friends Wojciech Karolak (Hammond organ) and Adam Czerwiński (drums) whose joint artistic path covers several decades. The material is the result of both their mutual love of jazz and a fascination with the traditional song. Hence the album's makeup, which in addition to own compositions by the two artists, also includes famous Duke Ellington and Sonny Rollins jazz evergreens, as well as instrumental versions of Polish standards. The accomplished Polish jazzmen recorded the material live, without any extra sessions or mixing. The artists were accompanied by other celebrities: Robert Majewski (flugelhorn), Tomek Grzegorski (tenor saxophone) and guitarist Marcin Wądołowski.