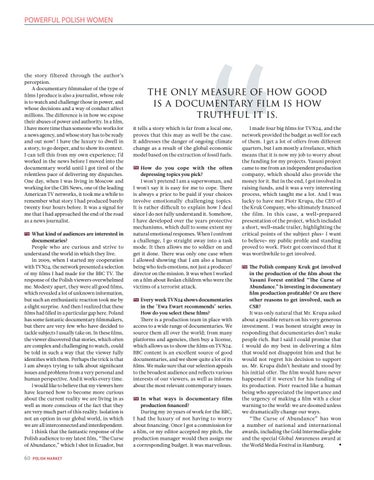 the story filtered through the author’s perception. A documentary filmmaker of the type of films I produce is also a journalist, whose role is to watch and challenge those in power, and whose decisions and a way of conduct affect millions. The difference is in how we expose their abuses of power and authority. In a film, I have more time than someone who works for a news agency, and whose story has to be ready and out now! I have the luxury to dwell in a story, to go deeper, and to show its context. I can tell this from my own experience; I’d worked in the news before I moved into the documentary world until I got tired of the relentless pace of delivering my dispatches. One day, when I was living in Moscow and working for the CBS News, one of the leading American TV networks, it took me a while to remember what story I had produced barely twenty four hours before. It was a signal for me that I had approached the end of the road as a news journalist. What kind of audiences are interested in documentaries? People who are curious and strive to understand the world in which they live. In 2009, when I started my cooperation with TVN24, the network presented a selection of my films I had made for the BBC TV. The response of the Polish viewers overwhelmed me. Modesty apart, they were all good films, which revealed a lot of unknown information, but such an enthusiastic reaction took me by a slight surprise. And then I realized that these films had filled in a particular gap here. Poland has some fantastic documentary filmmakers, but there are very few who have decided to tackle subjects I usually take on. In these films, the viewer discovered that stories, which often are complex and challenging to watch, could be told in such a way that the viewer fully identifies with them. Perhaps the trick is that I am always trying to talk about significant issues and problems from a very personal and human perspective. And it works every time. I would like to believe that my viewers here have learned how to become more curious about the current reality we are living in as well as more conscious of the fact that they are very much part of this reality. Isolation is not an option in our global world, in which we are all interconnected and interdependent. I think that the fantastic response of the Polish audience to my latest film, “The Curse of Abundance,” which I shot in Ecuador, but PM

THE ONLY MEASURE OF HOW GOOD IS A DOCUMENTARY FILM IS HOW TRUTHFUL IT IS. it tells a story which is far from a local one, proves that this may as well be the case. It addresses the danger of ongoing climate change as a result of the global economic model based on the extraction of fossil fuels. How do you cope with the often depressing topics you pick? I won't pretend I am a superwoman, and I won't say it is easy for me to cope. There is always a price to be paid if your choices involve emotionally challenging topics. It is rather difficult to explain how I deal since I do not fully understand it. Somehow, I have developed over the years protective mechanisms, which dull to some extent my natural emotional responses. When I confront a challenge, I go straight away into a task mode. It then allows me to soldier on and get it done. There was only one case when I allowed showing that I am also a human being who feels emotions, not just a producer/ director on the mission. It was when I worked on a film about Beslan children who were the victims of a terrorist attack. PM

Every week TVN24 shows documentaries in the "Ewa Ewart recommends" series. How do you select these films? There is a production team in place with access to a wide range of documentaries. We source them all over the world; from many platforms and agencies, then buy a license, which allows us to show the films on TVN24. BBC content is an excellent source of good documentaries, and we show quite a lot of its films. We make sure that our selection appeals to the broadest audience and reflects various interests of our viewers, as well as informs about the most relevant contemporary issues. PM

In what ways is documentary film production financed? During my 20 years of work for the BBC, I had the luxury of not having to worry about financing. Once I got a commission for a film, or my editor accepted my pitch, the production manager would then assign me a corresponding budget. It was marvellous. PM

I made four big films for TVN24, and the network provided the budget as well for each of them. I get a lot of offers from different quarters, but I am mostly a freelance, which means that it is now my job to worry about the funding for my projects. Yasuni project came to me from an independent production company, which should also provide the money for it. But in the end, I got involved in raising funds, and it was a very interesting process, which taught me a lot. And I was lucky to have met Piotr Krupa, the CEO of the Kruk Company, who ultimately financed the film. In this case, a well-prepared presentation of the project, which included a short, well-made trailer, highlighting the critical points of the subject plus- I want to believe- my public profile and standing proved to work. Piotr got convinced that it was worthwhile to get involved. The Polish company Kruk got involved in the production of the film about the Yasuni Forest entitled “The Curse of Abundance.” Is investing in documentary film production profitable? Or are there other reasons to get involved, such as CSR? It was only natural that Mr. Krupa asked about a possible return on his very generous investment. I was honest straight away in responding that documentaries don’t make people rich. But I said I could promise that I would do my best in delivering a film that would not disappoint him and that he would not regret his decision to support us. Mr. Krupa didn’t hesitate and stood by his initial offer. The film would have never happened if it weren’t for his funding of its production. Piotr reacted like a human being who appreciated the importance and the urgency of making a film with a clear warning to the world: we are doomed unless we dramatically change our ways. “The Curse of Abundance” has won a number of national and international awards, including the Gold Intermedia-globe and the special Global Awareness award at the World Media Festival in Hamburg. • PM