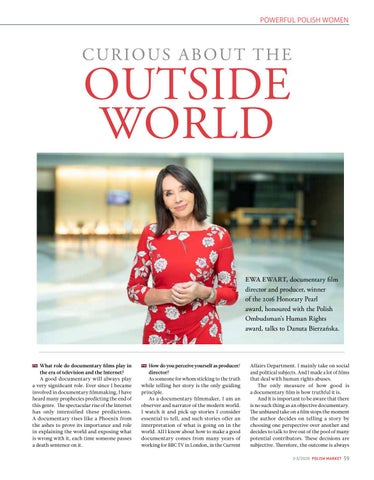 What role do documentary films play in the era of television and the Internet? A good documentary will always play a very significant role. Ever since I became involved in documentary filmmaking, I have heard many prophecies predicting the end of this genre. The spectacular rise of the Internet has only intensified these predictions. A documentary rises like a Phoenix from the ashes to prove its importance and role in explaining the world and exposing what is wrong with it, each time someone passes a death sentence on it. PM

How do you perceive yourself as producer/ director? As someone for whom sticking to the truth while telling her story is the only guiding principle. As a documentary filmmaker, I am an observer and narrator of the modern world. I watch it and pick up stories I consider essential to tell, and such stories offer an interpretation of what is going on in the world. All I know about how to make a good documentary comes from many years of working for BBC TV in London, in the Current PM

Affairs Department. I mainly take on social and political subjects. And I made a lot of films that deal with human rights abuses. The only measure of how good is a documentary film is how truthful it is. And it is important to be aware that there is no such thing as an objective documentary. The unbiased take on a film stops the moment the author decides on telling a story by choosing one perspective over another and decides to talk to five out of the pool of many potential contributors. These decisions are subjective. Therefore, the outcome is always 2-3/2020 polish market