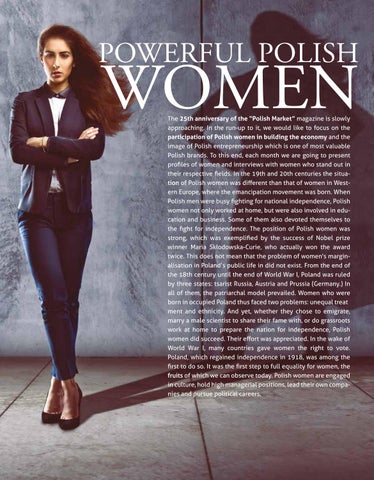 WOMEN The 25th anniversary of the “Polish Market” magazine is slowly approaching. In the run-up to it, we would like to focus on the participation of Polish women in building the economy and the image of Polish entrepreneurship which is one of most valuable Polish brands. To this end, each month we are going to present proﬁles of women and interviews with women who stand out in their respective ﬁelds. In the 19th and 20th centuries the situation of Polish women was diﬀerent than that of women in Western Europe, where the emancipation movement was born. When Polish men were busy ﬁghting for national independence, Polish women not only worked at home, but were also involved in education and business. Some of them also devoted themselves to the ﬁght for independence. The position of Polish women was strong, which was exempliﬁed by the success of Nobel prize winner Maria Skłodowska-Curie, who actually won the award twice. This does not mean that the problem of women's marginalisation in Poland’s public life in did not exist. From the end of the 18th century until the end of World War I, Poland was ruled by three states: tsarist Russia, Austria and Prussia (Germany.) In all of them, the patriarchal model prevailed. Women who were born in occupied Poland thus faced two problems: unequal treat ment and ethnicity. And yet, whether they chose to emigrate, marry a male scientist to share their fame with, or do grassroots work at home to prepare the nation for independence, Polish women did succeed. Their eﬀort was appreciated. In the wake of World War I, many countries gave women the right to vote. Poland, which regained independence in 1918, was among the ﬁrst to do so. It was the ﬁrst step to full equality for women, the fruits of which we can observe today. Polish women are engaged in culture, hold high managerial positions, lead their own companies and pursue political careers.