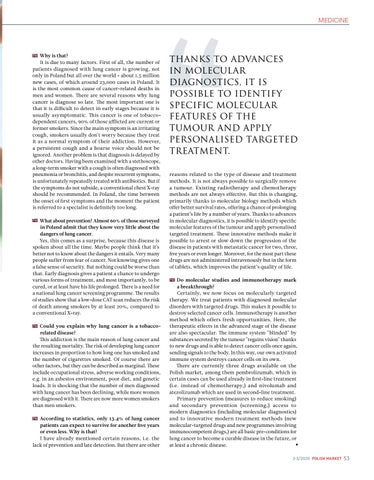 Why is that? It is due to many factors. First of all, the number of patients diagnosed with lung cancer is growing, not only in Poland but all over the world - about 1.5 million new cases, of which around 23,000 cases in Poland. It is the most common cause of cancer-related deaths in men and women. There are several reasons why lung cancer is diagnose so late. The most important one is that it is difficult to detect in early stages because it is usually asymptomatic. This cancer is one of tobaccodependent cancers, 90% of those afflicted are current or former smokers. Since the main symptom is an irritating cough, smokers usually don't worry because they treat it as a normal symptom of their addiction. However, a persistent cough and a hoarse voice should not be ignored. Another problem is that diagnosis is delayed by other doctors. Having been examined with a stethoscope, a long-term smoker with a cough is often diagnosed with pneumonia or bronchitis, and despite recurrent symptoms, is unfortunately repeatedly treated with antibiotics. But if the symptoms do not subside, a conventional chest X-ray should be recommended. In Poland, the time between the onset of first symptoms and the moment the patient is referred to a specialist is definitely too long. PM

What about prevention? Almost 60% of those surveyed in Poland admit that they know very little about the dangers of lung cancer. Yes, this comes as a surprise, because this disease is spoken about all the time. Maybe people think that it's better not to know about the dangers it entails. Very many people suffer from fear of cancer. Not knowing gives one a false sense of security. But nothing could be worse than that. Early diagnosis gives a patient a chance to undergo various forms of treatment, and most importantly, to be cured, or at least have his life prolonged. There is a need for a national lung cancer screening programme. The results of studies show that a low-dose CAT scan reduces the risk of death among smokers by at least 20%, compared to a conventional X-ray. PM

Could you explain why lung cancer is a tobaccorelated disease? This addiction is the main reason of lung cancer and the resulting mortality. The risk of developing lung cancer increases in proportion to how long one has smoked and the number of cigarettes smoked. Of course there are other factors, but they can be described as marginal. These include occupational stress, adverse working conditions, e.g. in an asbestos environment, poor diet, and genetic loads. It is shocking that the number of men diagnosed with lung cancer has been declining, while more women are diagnosed with it. There are now more women smokers than men smokers. PM

According to statistics, only 13.4% of lung cancer patients can expect to survive for another five years or even less. Why is that? I have already mentioned certain reasons, i.e. the lack of prevention and late detection. But there are other PM