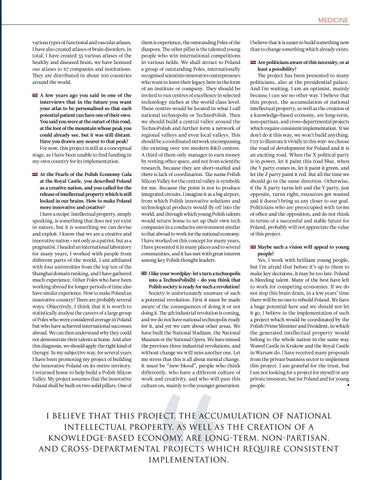 MEDICINE various types of functional and vascular atlases. I have also created atlases of brain disorders. In total, I have created 35 various atlases of the healthy and diseased brain, we have licensed our atlases to 67 companies and institutions. They are distributed in about 100 countries around the world. A few years ago you said in one of the interviews that in the future you want your atlas to be personalised so that each potential patient can have one of their own. You said you were at the outset of this road, at the foot of the mountain whose peak you could already see, but it was still distant. Have you drawn any nearer to that peak? For now, this project is still at a conceptual stage, as I have been unable to find funding in my own country for its implementation. PM

At the Pearls of the Polish Economy Gala at the Royal Castle, you described Poland as a creative nation, and you called for the release of intellectual property which is still locked in our brains. How to make Poland more innovative and creative? I have a recipe. Intellectual property, simply speaking, is something that does not yet exist in nature, but it is something we can devise and exploit. I know that we are a creative and innovative nation - not only as a patriot, but as a pragmatist. I headed an international laboratory for many years, I worked with people from different parts of the world, I am affiliated with four universities from the top ten of the Shanghai domain ranking, and I have gathered much experience. Other Poles who have been working abroad for longer periods of time also have similar experience. How to make Poland an innovative country? There are probably several ways. Objectively, I think that it is worth to statistically analyse the careers of a large group of Poles who were considered average in Poland but who have achieved international successes abroad. We can then understand why they could not demonstrate their talents at home. And after this diagnosis, we should apply the right kind of therapy. In my subjective way, for several years I have been promoting my project of building the innovative Poland on its entire territory. I returned home to help build a Polish Silicon Valley. My project assumes that the innovative Poland shall be built on two solid pillars. One of PM

them is experience, the outstanding Poles of the diaspora. The other pillar is the talented young people who win international competitions in various fields. We shall attract to Poland a group of outstanding Poles, internationally recognised scientists-innovators-entrepreneurs who want to leave their legacy here in the form of an institute or company. They should be invited to run centres of excellence in selected technology niches at the world class level. These centres would be located in what I call national technopolis or TechnoPolish. Then we should build a central valley around the TechnoPolish and further form a network of regional valleys and even local valleys. This should be a coordinated network encompassing the existing over 100 modern R&D centres. A third of them only manages to earn money by renting office space, and not from scientific research, because they are short-staffed and there is lack of coordination. The name Polish Silicon Valley for the central valley is symbolic for me. Because the point is not to produce integrated circuits. I imagine it as a big airport, from which Polish innovative solutions and technological products would fly off into the world, and through which young Polish talents would return home to set up their own tech companies in a conducive environment similar to that abroad to work for the national economy. I have worked on this concept for many years, I have presented it in many places and to several communities, and it has met with great interest among key Polish thought leaders. I like your wordplay: let's turn a technopolis into a TechnoPolis(h) - do you think that Polish society is ready for such a revolution? Society is unfortunately unaware of such a potential revolution. First it must be made aware of the consequences of doing it or not doing it. The 4th industrial revolution is coming, and we do not have national technopolis ready for it, and yet we care about other areas. We have built the National Stadium, the National Museum or the National Opera. We have missed the previous three industrial revolutions, and without change we will miss another one. Let me stress that this is all about mental change. It must be “new blood”, people who think differently, who have a different culture of work and creativity, and who will pass this culture on, mainly to the younger generation. PM

I believe that it is easier to build something new than to change something which already exists. Are politicians aware of this necessity, or at least a possibility? The project has been presented to many politicians, also at the presidential palace. And I'm waiting. I am an optimist, mainly because I can see no other way. I believe that this project, the accumulation of national intellectual property, as well as the creation of a knowledge-based economy, are long-term, non-partisan, and cross-departmental projects which require consistent implementation. If we don't do it this way, we won't build anything. I try to illustrate it vividly in this way: we choose the road of development for Poland and it is an exciting road. When the X political party is in power, let it paint this road blue, when the Y party comes in, let it paint it green, and let the Z party paint it red. But all the time we should go in the same direction. Otherwise, if the X party turns left and the Y party, just opposite, turns right, resources get wasted and it doesn’t bring us any closer to our goal. Politicians who are preoccupied with terms of office and the opposition, and do not think in terms of a successful and stable future for Poland, probably will not appreciate the value of this project. PM

Maybe such a vision will appeal to young people? Yes, I work with brilliant young people, but I'm afraid that before it’s up to them to make key decisions, it may be too late. Poland is bleeding talent. Many of the best have left to work for competing economies. If we do not stop this brain drain, in a few years’ time there will be no one to rebuild Poland. We have a huge potential here and we should not let it go. I believe in the implementation of such a project which would be coordinated by the Polish Prime Minister and President, in which the generated intellectual property would belong to the whole nation in the same way Wawel Castle in Krakow and the Royal Castle in Warsaw do. I have received many proposals from the private business sector to implement this project. I am grateful for the trust, but I am not looking for a project for myself or any private investors, but for Poland and for young people. • PM

I BELIEVE THAT THIS PROJECT, THE ACCUMULATION OF NATIONAL INTELLECTUAL PROPERTY, AS WELL AS THE CREATION OF A KNOWLEDGE-BASED ECONOMY, ARE LONG-TERM, NON-PARTISAN, AND CROSS-DEPARTMENTAL PROJECTS WHICH REQUIRE CONSISTENT IMPLEMENTATION.