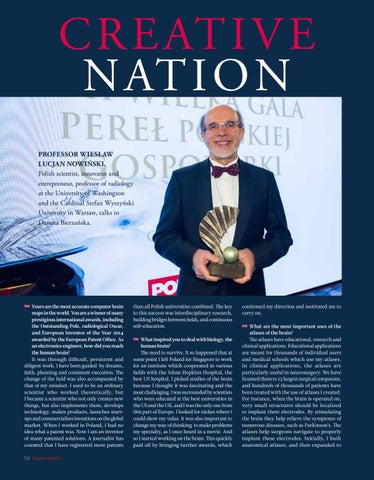 PROFESSOR WIESŁAW LUCJAN NOWIŃSKI, Polish scientist, innovator and entrepreneur, professor of radiology at the University of Washington and the Cardinal Stefan Wyszyński University in Warsaw, talks to Danuta Bierzańska.

Yours are the most accurate computer brain maps in the world. You are a winner of many prestigious international awards, including the Outstanding Pole, radiological Oscar, and European Inventor of the Year 2014 awarded by the European Patent Office. As an electronics engineer, how did you reach the human brain? It was through difficult, persistent and diligent work. I have been guided by dreams, faith, planning and consistent execution. The change of the field was also accompanied by that of my mindset. I used to be an ordinary scientist who worked theoretically, but I became a scientist who not only creates new things, but also implements them, develops technology, makes products, launches startups and commercialises inventions on the global market. When I worked in Poland, I had no idea what a patent was. Now I am an inventor of many patented solutions. A journalist has counted that I have registered more patents PM

than all Polish universities combined. The key to this success was interdisciplinary research, building bridges between fields, and continuous self-education. What inspired you to deal with biology, the human brain? The need to survive. It so happened that at some point I left Poland for Singapore to work for an institute which cooperated in various fields with the Johns Hopkins Hospital, the best US hospital. I picked studies of the brain because I thought it was fascinating and the most challenging. I was surrounded by scientists who were educated at the best universities in the US and the UK, and I was the only one from this part of Europe. I looked for niches where I could show my value. It was also important to change my way of thinking to make problems my specialty, as I once heard in a movie. And so I started working on the brain. This quickly paid off by bringing further awards, which PM

confirmed my direction and motivated me to carry on. What are the most important uses of the atlases of the brain? The atlases have educational, research and clinical applications. Educational applications are meant for thousands of individual users and medical schools which use my atlases. In clinical applications, the atlases are particularly useful in neurosurgery. We have licensed them to 13 largest surgical companies, and hundreds of thousands of patients have been treated with the use of atlases I created. For instance, when the brain is operated on, very small structures should be localized to implant there electrodes. By stimulating the brain they help relieve the symptoms of numerous diseases, such as Parkinson's. The atlases help surgeons navigate to properly implant these electrodes. Initially, I built anatomical atlases, and then expanded to PM