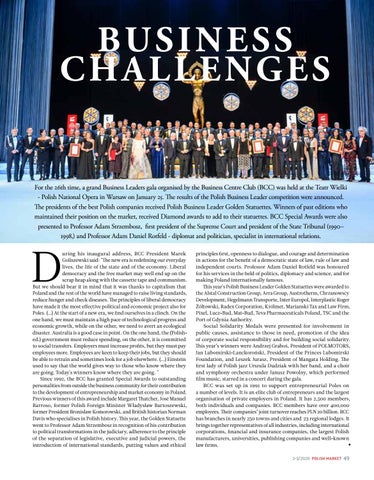 For the 26th time, a grand Business Leaders gala organised by the Business Centre Club (BCC) was held at the Teatr Wielki - Polish National Opera in Warsaw on January 25. The results of the Polish Business Leader competition were announced. The presidents of the best Polish companies received Polish Business Leader Golden Statuettes. Winners of past editions who maintained their position on the market, received Diamond awards to add to their statuettes. BCC Special Awards were also presented to Professor Adam Strzembosz, first president of the Supreme Court and president of the State Tribunal (1990– 1998,) and Professor Adam Daniel Rotfeld - diplomat and politician, specialist in international relations.

uring his inaugural address, BCC President Marek Goliszewski said: "The new era is redefining our everyday lives, the life of the state and of the economy. Liberal democracy and the free market may well end up on the scrap heap along with the cassette tape and communism. But we should bear it in mind that it was thanks to capitalism that Poland and the rest of the world have managed to raise living standards, reduce hunger and check diseases. The principles of liberal democracy have made it the most effective political and economic project also for Poles. (…) At the start of a new era, we find ourselves in a clinch. On the one hand, we must maintain a high pace of technological progress and economic growth, while on the other, we need to avert an ecological disaster. Australia is a good case in point. On the one hand, the (Polished.) government must reduce spending, on the other, it is committed to social transfers. Employers must increase profits, but they must pay employees more. Employees are keen to keep their jobs, but they should be able to retrain and sometimes look for a job elsewhere. (...) Einstein used to say that the world gives way to those who know where they are going. Today's winners know where they are going. " Since 1992, the BCC has granted Special Awards to outstanding personalities from outside the business community for their contribution to the development of entrepreneurship and market economy in Poland. Previous winners of this award include Margaret Thatcher, José Manuel Barroso, former Polish Foreign Minister Władysław Bartoszewski, former President Bronisław Komorowski, and British historian Norman Davis who specialises in Polish history. This year, the Golden Statuette went to Professor Adam Strzembosz in recognition of his contribution to political transformations in the judiciary, adherence to the principle of the separation of legislative, executive and judicial powers, the introduction of international standards, putting values and ethical

principles first, openness to dialogue, and courage and determination in actions for the benefit of a democratic state of law, rule of law and independent courts. Professor Adam Daniel Rotfeld was honoured for his services in the field of politics, diplomacy and science, and for making Poland internationally famous. This year's Polish Business Leader Golden Statuettes were awarded to the Alstal Construction Group, Arra Group, Austrotherm, Chrzanowscy Development, Hegelmann Transporte, Inter Europol, Interplastic Roger Żółtowski, Radex Corporation, Królmet, Marianski Tax and Law Firm, Pixel, Łucz-Bud, Mat-Bud, Teva Pharmaceuticals Poland, TSC and the Port of Gdynia Authority. Social Solidarity Medals were presented for involvement in public causes, assistance to those in need, promotion of the idea of corporate social responsibility and for building social solidarity. This year’s winners were Andrzej Graboś, President of POLMOTORS, Jan Lubomirski-Lanckoroński, President of the Princes Lubomirski Foundation, and Leszek Jurasz, President of Mangata Holding. The first lady of Polish jazz Urszula Dudziak with her band, and a choir and symphony orchestra under Janusz Powolny, which performed film music, starred in a concert during the gala. BCC was set up in 1991 to support entrepreneurial Poles on a number of levels. It is an elite club of entrepreneurs and the largest organisation of private employers in Poland. It has 2,500 members, both individuals and companies. BCC members have over 400,000 employees. Their companies’ joint turnover reaches PLN 20 billion. BCC has branches in nearly 250 towns and cities and 23 regional lodges. It brings together representatives of all industries, including international corporations, financial and insurance companies, the largest Polish manufacturers, universities, publishing companies and well-known • law firms. 2-3/2020 polish market