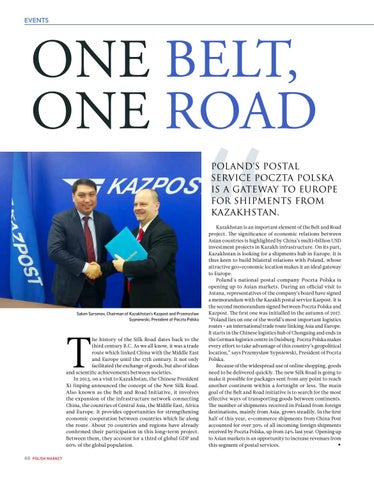 ONE BELT, ONE ROAD POLAND'S POSTAL SERVICE POCZTA POLSKA IS A GATEWAY TO EUROPE FOR SHIPMENTS FROM KAZAKHSTAN.

he history of the Silk Road dates back to the third century B.C. As we all know, it was a trade route which linked China with the Middle East and Europe until the 17th century. It not only facilitated the exchange of goods, but also of ideas and scientific achievements between societies. In 2013, on a visit to Kazakhstan, the Chinese President Xi Jinping announced the concept of the New Silk Road. Also known as the Belt and Road Initiative, it involves the expansion of the infrastructure network connecting China, the countries of Central Asia, the Middle East, Africa and Europe. It provides opportunities for strengthening economic cooperation between countries which lie along the route. About 70 countries and regions have already confirmed their participation in this long-term project. Between them, they account for a third of global GDP and 60% of the global population.

Kazakhstan is an important element of the Belt and Road project. The significance of economic relations between Asian countries is highlighted by China’s multi-billion USD investment projects in Kazakh infrastructure. On its part, Kazakhstan is looking for a shipments hub in Europe. It is thus keen to build bilateral relations with Poland, whose attractive geo-economic location makes it an ideal gateway to Europe. Poland's national postal company Poczta Polska is opening up to Asian markets. During an official visit to Astana, representatives of the company's board have signed a memorandum with the Kazakh postal service Kazpost. It is the second memorandum signed between Poczta Polska and Kazpost. The first one was initialled in the autumn of 2017. “Poland lies on one of the world’s most important logistics routes - an international trade route linking Asia and Europe. It starts in the Chinese logistics hub of Chongaing and ends in the German logistics centre in Duisburg. Poczta Polska makes every effort to take advantage of this country’s geopolitical location,” says Przemysław Sypniewski, President of Poczta Polska. Because of the widespread use of online shopping, goods need to be delivered quickly. The new Silk Road is going to make it possible for packages sent from any point to reach another continent within a fortnight or less. The main goal of the Belt and Road initiative is to search for the most effective ways of transporting goods between continents. The number of shipments received in Poland from foreign destinations, mainly from Asia, grows steadily. In the first half of this year, e-commerce shipments from China Post accounted for over 30% of all incoming foreign shipments received by Poczta Polska, up from 24% last year. Opening up to Asian markets is an opportunity to increase revenues from this segment of postal services. •