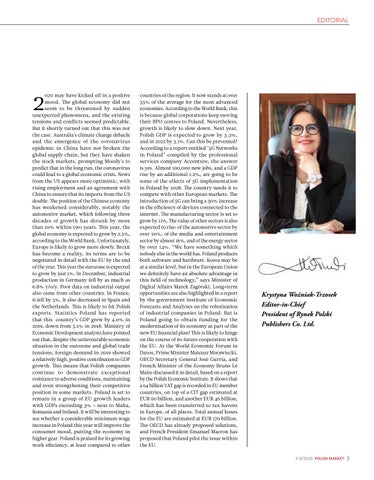 020 may have kicked off in a positive mood. The global economy did not seem to be threatened by sudden unexpected phenomena, and the existing tensions and conflicts seemed predictable. But it shortly turned out that this was not the case. Australia's climate change debacle and the emergence of the coronavirus epidemic in China have not broken the global supply chain, but they have shaken the stock markets, prompting Moody's to predict that in the long run, the coronavirus could lead to a global economic crisis. News from the US appears more optimistic, with rising employment and an agreement with China to ensure that its imports from the US double. The position of the Chinese economy has weakened considerably, notably the automotive market, which following three decades of growth has shrunk by more than 10% within two years. This year, the global economy is expected to grow by 2.5%, according to the World Bank. Unfortunately, Europe is likely to grow more slowly. Brexit has become a reality, its terms are to be negotiated in detail with the EU by the end of the year. This year the eurozone is expected to grow by just 1%. In December, industrial production in Germany fell by as much as 6.8% y/o/y. Poor data on industrial output also came from other countries. In France, it fell by 3%. It also decreased in Spain and the Netherlands. This is likely to hit Polish exports. Statistics Poland has reported that this country’s GDP grew by 4.0% in 2019, down from 5.1% in 2018. Ministry of Economic Development analysts have pointed out that, despite the unfavourable economic situation in the eurozone and global trade tensions, foreign demand in 2019 showed a relatively high, positive contribution to GDP growth. This means that Polish companies continue to demonstrate exceptional resistance to adverse conditions, maintaining and even strengthening their competitive position in some markets. Poland is set to remain in a group of EU growth leaders with GDPs exceeding 3% - next to Malta, Romania and Ireland. It will be interesting to see whether a considerable minimum wage increase in Poland this year will improve the consumer mood, putting the economy in higher gear. Poland is praised for its growing work efficiency, at least compared to other

countries of the region. It now stands at over 35% of the average for the most advanced economies. According to the World Bank, this is because global corporations keep moving their BPO centres to Poland. Nevertheless, growth is likely to slow down. Next year, Polish GDP is expected to grow by 3.3%, and in 2022 by 3.1%. Can this be prevented? According to a report entitled "5G Networks in Poland" compiled by the professional services company Accenture, the answer is yes. Almost 100,000 new jobs, and a GDP rise by an additional 1.2%, are going to be some of the effects of 5G implementation in Poland by 2028. The country needs it to compete with other European markets. The introduction of 5G can bring a 30% increase in the efficiency of devices connected to the internet. The manufacturing sector is set to grow by 11%. The value of other sectors is also expected to rise: of the automotive sector by over 20%, of the media and entertainment sector by almost 16%, and of the energy sector by over 14%. “We have something which nobody else in the world has. Poland produces both software and hardware. Korea may be at a similar level, but in the European Union we definitely have an absolute advantage in this field of technology,” says Minister of Digital Affairs Marek Zagórski. Long-term opportunities are also highlighted in a report by the government Institute of Economic Forecasts and Analyses on the robotisation of industrial companies in Poland. But is Poland going to obtain funding for the modernisation of its economy as part of the new EU financial plan? This is likely to hinge on the course of its future cooperation with the EU. At the World Economic Forum in Davos, Prime Minister Mateusz Morawiecki, OECD Secretary General José Gurría, and French Minister of the Economy Bruno Le Maire discussed it in detail, based on a report by the Polish Economic Institute. It shows that a 64 billion VAT gap is recorded in EU member countries, on top of a CIT gap estimated at EUR 60 billion, and another EUR 46 billion, which has been transferred to tax havens in Europe, of all places. Total annual losses for the EU are estimated at EUR 170 billion. The OECD has already proposed solutions, and French President Emanuel Macron has proposed that Poland pilot the issue within the EU.