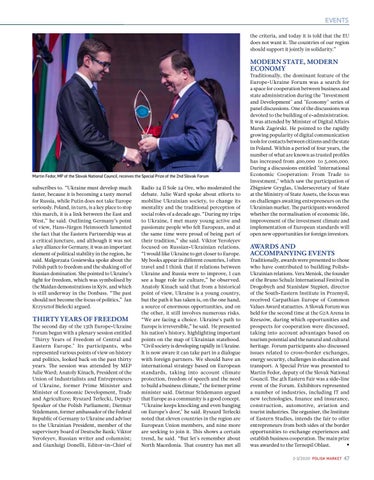 EVENTS the criteria, and today it is told that the EU does not want it. The countries of our region should support it jointly in solidarity.”

subscribes to. “Ukraine must develop much faster, because it is becoming a tasty morsel for Russia, while Putin does not take Europe seriously. Poland, in turn, is a key place to stop this march, it is a link between the East and West,” he said. Outlining Germany’s point of view, Hans-Jürgen Heimsoeth lamented the fact that the Eastern Partnership was at a critical juncture, and although it was not a key alliance for Germany, it was an important element of political stability in the region, he said. Małgorzata Gosiewska spoke about the Polish path to freedom and the shaking off of Russian domination. She pointed to Ukraine’s fight for freedom, which was symbolised by the Maidan demonstrations in Kyiv, and which is still underway in the Donbass. “The past should not become the focus of politics,” Jan Krzysztof Bielecki argued.

The second day of the 13th Europe-Ukraine Forum began with a plenary session entitled "Thirty Years of Freedom of Central and Eastern Europe." Its participants, who represented various points of view on history and politics, looked back on the past thirty years. The session was attended by MEP Julie Ward; Anatoly Kinach, President of the Union of Industrialists and Entrepreneurs of Ukraine, former Prime Minister and Minister of Economic Development, Trade and Agriculture; Ryszard Terlecki, Deputy Speaker of the Polish Parliament; Dietmar Stüdemann, former ambassador of the Federal Republic of Germany to Ukraine and adviser to the Ukrainian President, member of the supervisory board of Deutsche Bank; Viktor Yerofeyev, Russian writer and columnist; and Gianluigi Donelli, Editor-in-Chief of

Radio 24 Il Sole 24 Ore, who moderated the debate. Julie Ward spoke about efforts to mobilise Ukrainian society, to change its mentality and the traditional perception of social roles of a decade ago. “During my trips to Ukraine, I met many young active and passionate people who felt European, and at the same time were proud of being part of their tradition,” she said. Viktor Yerofeyev focused on Russian-Ukrainian relations. “I would like Ukraine to get closer to Europe. My books appear in different countries, I often travel and I think that if relations between Ukraine and Russia were to improve, I can see a huge role for culture,” he observed. Anatoly Kinach said that from a historical point of view, Ukraine is a young country, but the path it has taken is, on the one hand, a source of enormous opportunities, and on the other, it still involves numerous risks. “We are facing a choice. Ukraine's path to Europe is irreversible,” he said. He presented his nation’s history, highlighting important points on the map of Ukrainian statehood. “Civil society is developing rapidly in Ukraine. It is now aware it can take part in a dialogue with foreign partners. We should have an international strategy based on European standards, taking into account climate protection, freedom of speech and the need to build a business climate,” the former prime minister said. Dietmar Stüdemann argued that Europe as a community is a good concept. “Ukraine keeps knocking and even banging on Europe’s door," he said. Ryszard Terlecki noted that eleven countries in the region are European Union members, and nine more are seeking to join it. This shows a certain trend, he said. “But let's remember about North Macedonia. That country has met all

Traditionally, the dominant feature of the Europe-Ukraine Forum was a search for a space for cooperation between business and state administration during the "Investment and Development" and "Economy" series of panel discussions. One of the discussions was devoted to the building of e-administration. It was attended by Minister of Digital Affairs Marek Zagórski. He pointed to the rapidly growing popularity of digital communication tools for contacts between citizens and the state in Poland. Within a period of four years, the number of what are known as trusted profiles has increased from 400,000 to 5,000,000. During a discussions entitled "International Economic Cooperation: From Trade to Investment," which saw the participation of Zbigniew Gryglas, Undersecretary of State at the Ministry of State Assets, the focus was on challenges awaiting entrepreneurs on the Ukrainian market. The participants wondered whether the normalisation of economic life, improvement of the investment climate and implementation of European standards will open new opportunities for foreign investors.

Traditionally, awards were presented to those who have contributed to building PolishUkrainian relations. Vera Meniok, the founder of the Bruno Schulz International Festival in Drogobych and Stanisław Stępień, director of the South-Eastern Institute in Przemyśl, received Carpathian Europe of Common Values Award statuettes. A Slovak Forum was held for the second time at the G2A Arena in Rzeszów, during which opportunities and prospects for cooperation were discussed, taking into account advantages based on tourism potential and the natural and cultural heritage. Forum participants also discussed issues related to cross-border exchanges, energy security, challenges in education and transport. A Special Prize was presented to Martin Fedor, deputy of the Slovak National Council. The 4th Eastern Fair was a side-line event of the Forum. Exhibitors represented a number of industries, including IT and new technologies, finance and insurance, construction, automotive, aviation and tourist industries. The organiser, the Institute of Eastern Studies, intends the fair to offer entrepreneurs from both sides of the border opportunities to exchange experiences and establish business cooperation. The main prize was awarded to the Ternopil Oblast. • 2-3/2020 polish market