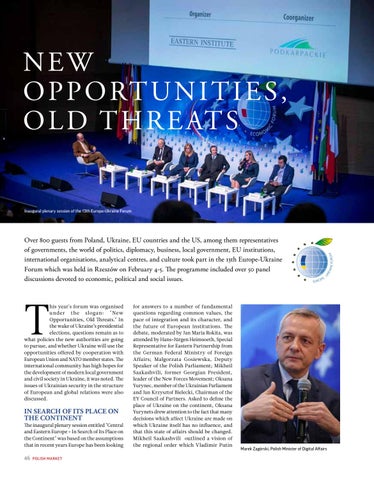 Over 800 guests from Poland, Ukraine, EU countries and the US, among them representatives of governments, the world of politics, diplomacy, business, local government, EU institutions, international organisations, analytical centres, and culture took part in the 13th Europe-Ukraine Forum which was held in Rzeszów on February 4-5. The programme included over 50 panel discussions devoted to economic, political and social issues.

his year's forum was organised u nder the slogan: "New Opportunities, Old Threats." In the wake of Ukraine’s presidential elections, questions remain as to what policies the new authorities are going to pursue, and whether Ukraine will use the opportunities offered by cooperation with European Union and NATO member states. The international community has high hopes for the development of modern local government and civil society in Ukraine, it was noted. The issues of Ukrainian security in the structure of European and global relations were also discussed.

IN SEARCH OF ITS PLACE ON THE CONTINENT

for answers to a number of fundamental questions regarding common values, the pace of integration and its character, and the future of European institutions. The debate, moderated by Jan Maria Rokita, was attended by Hans-Jürgen Heimsoeth, Special Representative for Eastern Partnership from the German Federal Ministry of Foreign Affairs; Małgorzata Gosiewska, Deputy Speaker of the Polish Parliament; Mikheil Saakashvili, former Georgian President, leader of the New Forces Movement; Oksana Yurynec, member of the Ukrainian Parliament and Jan Krzysztof Bielecki, Chairman of the EY Council of Partners. Asked to define the place of Ukraine on the continent, Oksana Yurynets drew attention to the fact that many decisions which affect Ukraine are made on which Ukraine itself has no influence, and that this state of affairs should be changed. Mikheil Saakashvili outlined a vision of the regional order which Vladimir Putin