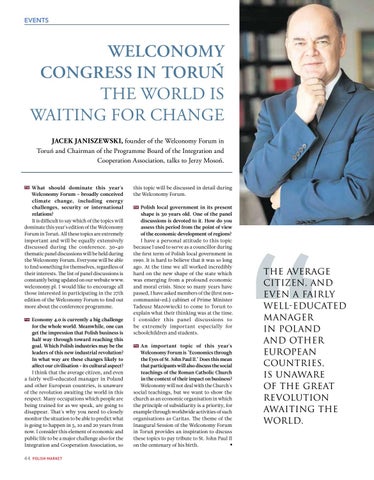 WELCONOMY CONGRESS IN TORUŃ THE WORLD IS WAITING FOR CHANGE JACEK JANISZEWSKI, founder of the Welconomy Forum in Toruń and Chairman of the Programme Board of the Integration and Cooperation Association, talks to Jerzy Mosoń.

What should dominate this year's Welconomy Forum - broadly conceived climate change, including energy challenges, security or international relations? It is difficult to say which of the topics will dominate this year's edition of the Welconomy Forum in Toruń. All these topics are extremely important and will be equally extensively discussed during the conference. 30-40 thematic panel discussions will be held during the Welconomy Forum. Everyone will be able to find something for themselves, regardless of their interests. The list of panel discussions is constantly being updated on our website www. welconomy.pl. I would like to encourage all those interested in participating in the 27th edition of the Welconomy Forum to find out more about the conference programme. PM

Economy 4.0 is currently a big challenge for the whole world. Meanwhile, one can get the impression that Polish business is half way through toward reaching this goal. Which Polish industries may be the leaders of this new industrial revolution? In what way are these changes likely to affect our civilisation - its cultural aspect? I think that the average citizen, and even a fairly well-educated manager in Poland and other European countries, is unaware of the revolution awaiting the world in this respect. Many occupations which people are being trained for as we speak, are going to disappear. That's why you need to closely monitor the situation to be able to predict what is going to happen in 5, 10 and 20 years from now. I consider this element of economic and public life to be a major challenge also for the Integration and Cooperation Association, so PM

this topic will be discussed in detail during the Welconomy Forum. Polish local government in its present shape is 30 years old. One of the panel discussions is devoted to it. How do you assess this period from the point of view of the economic development of regions? I have a personal attitude to this topic because I used to serve as a councillor during the first term of Polish local government in 1990. It is hard to believe that it was so long ago. At the time we all worked incredibly hard on the new shape of the state which was emerging from a profound economic and moral crisis. Since so many years have passed, I have asked members of the (first noncommunist-ed.) cabinet of Prime Minister Tadeusz Mazowiecki to come to Toruń to explain what their thinking was at the time. I consider this panel discussions to be extremely important especially for schoolchildren and students. PM

An important topic of this year's Welconomy Forum is "Economics through the Eyes of St. John Paul II." Does this mean that participants will also discuss the social teachings of the Roman Catholic Church in the context of their impact on business? Welconomy will not deal with the Church's social teachings, but we want to show the church as an economic organisation in which the principle of subsidiarity is a priority, for example through worldwide activities of such organisations as Caritas. The theme of the Inaugural Session of the Welconomy Forum in Toruń provides an inspiration to discuss these topics to pay tribute to St. John Paul II • on the centenary of his birth. PM

THE AVERAGE CITIZEN, AND EVEN A FAIRLY WELL-EDUCATED MANAGER IN POLAND AND OTHER EUROPEAN COUNTRIES, IS UNAWARE OF THE GREAT REVOLUTION AWAITING THE WORLD.