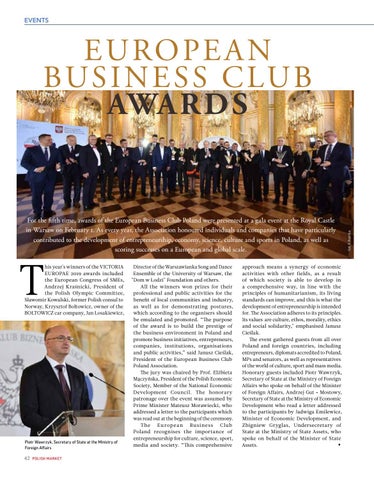 For the fifth time, awards of the European Business Club Poland were presented at a gala event at the Royal Castle in Warsaw on February 1. As every year, the Association honoured individuals and companies that have particularly contributed to the development of entrepreneurship, economy, science, culture and sports in Poland, as well as scoring successes on a European and global scale.

Piotr Wawrzyk, Secretary of State at the Ministry of Foreign Affairs

Director of the Warszawianka Song and Dance Ensemble of the University of Warsaw, the "Dom w Łodzi" Foundation and others. All the winners won prizes for their professional and public activities for the benefit of local communities and industry, as well as for demonstrating postures, which according to the organisers should be emulated and promoted. “The purpose of the award is to build the prestige of the business environment in Poland and promote business initiatives, entrepreneurs, companies, institutions, organisations and public activities,” said Janusz Cieślak, President of the European Business Club Poland Association. The jury was chaired by Prof. Elżbieta Mączyńska, President of the Polish Economic Society, Member of the National Economic Development Council. The honorary patronage over the event was assumed by Prime Minister Mateusz Morawiecki, who addressed a letter to the participants which was read out at the beginning of the ceremony. T he Eu rop e a n B u si ne s s C lub Poland recognises the importance of entrepreneurship for culture, science, sport, media and society. “This comprehensive

approach means a synergy of economic activities with other fields, as a result of which society is able to develop in a comprehensive way, in line with the principles of humanitarianism, its living standards can improve, and this is what the development of entrepreneurship is intended for. The Association adheres to its principles. Its values are culture, ethos, morality, ethics and social solidarity," emphasised Janusz Cieślak. The event gathered guests from all over Poland and foreign countries, including entrepreneurs, diplomats accredited to Poland, MPs and senators, as well as representatives of the world of culture, sport and mass media. Honorary guests included Piotr Wawrzyk, Secretary of State at the Ministry of Foreign Affairs who spoke on behalf of the Minister of Foreign Affairs, Andrzej Gut - Mostowy, Secretary of State at the Ministry of Economic Development who read a letter addressed to the participants by Jadwiga Emilewicz, Minister of Economic Development, and Zbigniew Gryglas, Undersecretary of State at the Ministry of State Assets, who spoke on behalf of the Minister of State Assets. •