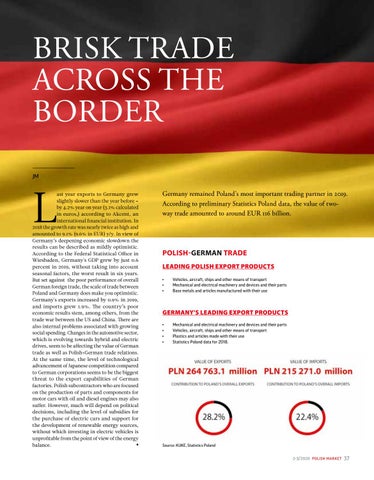 BRISK TRADE ACROSS THE BORDER JM

ast year exports to Germany grew slightly slower than the year before – by 4.2% year on year (3.1% calculated in euros,) according to Akcent, an international financial institution. In 2018 the growth rate was nearly twice as high and amounted to 9.1% (9.6% in EUR) y/y. In view of Germany’s deepening economic slowdown the results can be described as mildly optimistic. According to the Federal Statistical Office in Wiesbaden, Germany's GDP grew by just 0.6 percent in 2019, without taking into account seasonal factors, the worst result in six years. But set against the poor performance of overall German foreign trade, the scale of trade between Poland and Germany does make you optimistic. Germany's exports increased by 0.9% in 2019, and imports grew 1.9%. The country’s poor economic results stem, among others, from the trade war between the US and China. There are also internal problems associated with growing social spending. Changes in the automotive sector, which is evolving towards hybrid and electric drives, seem to be affecting the value of German trade as well as Polish-German trade relations. At the same time, the level of technological advancement of Japanese competition compared to German corporations seems to be the biggest threat to the export capabilities of German factories. Polish subcontractors who are focused on the production of parts and components for motor cars with oil and diesel engines may also suffer. However, much will depend on political decisions, including the level of subsidies for the purchase of electric cars and support for the development of renewable energy sources, without which investing in electric vehicles is unprofitable from the point of view of the energy balance. •

Germany remained Poland's most important trading partner in 2019. According to preliminary Statistics Poland data, the value of twoway trade amounted to around EUR 116 billion.

Vehicles, aircraft, ships and other means of transport Mechanical and electrical machinery and devices and their parts Base metals and articles manufactured with their use

Mechanical and electrical machinery and devices and their parts Vehicles, aircraft, ships and other means of transport Plastics and articles made with their use Statistics Poland data for 2018.