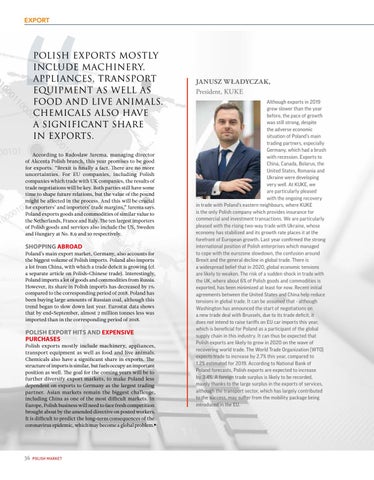 POLISH EXPORTS MOSTLY INCLUDE MACHINERY, APPLIANCES, TRANSPORT EQUIPMENT AS WELL AS FOOD AND LIVE ANIMALS. CHEMICALS ALSO HAVE A SIGNIFICANT SHARE IN EXPORTS. According to Radosław Jarema, managing director of Akcenta Polish branch, this year promises to be good for exports. “Brexit is finally a fact. There are no more uncertainties. For EU companies, including Polish companies which trade with UK companies, the results of trade negotiations will be key. Both parties still have some time to shape future relations, but the value of the pound might be affected in the process. And this will be crucial for exporters’ and importers’ trade margins,” Jarema says. Poland exports goods and commodities of similar value to the Netherlands, France and Italy. The ten largest importers of Polish goods and services also include the US, Sweden and Hungary at No. 8,9 and 10 respectively.

SHOPPING ABROAD Poland’s main export market, Germany, also accounts for the biggest volume of Polish imports. Poland also imports a lot from China, with which a trade deficit is growing (cf. a separate article on Polish-Chinese trade). Interestingly, Poland imports a lot of goods and commodities from Russia. However, its share in Polish imports has decreased by 1% compared to the corresponding period of 2018. Poland has been buying large amounts of Russian coal, although this trend began to slow down last year. Eurostat data shows that by end-September, almost 2 million tonnes less was imported than in the corresponding period of 2018.

POLISH EXPORT HITS AND EXPENSIVE PURCHASES Polish exports mostly include machinery, appliances, transport equipment as well as food and live animals. Chemicals also have a significant share in exports. The structure of imports is similar, but fuels occupy an important position as well. The goal for the coming years will be to further diversify export markets, to make Poland less dependent on exports to Germany as the largest trading partner. Asian markets remain the biggest challenge, including China as one of the most difficult markets. In Europe, Polish business will need to face fresh competition brought about by the amended directive on posted workers. It is difficult to predict the long-term consequences of the coronavirus epidemic, which may become a global problem.•

JANUSZ WŁADYCZAK, President, KUKE Although exports in 2019 grew slower than the year before, the pace of growth was still strong, despite the adverse economic situation of Poland’s main trading partners, especially Germany, which had a brush with recession. Exports to China, Canada, Belarus, the United States, Romania and Ukraine were developing very well. At KUKE, we are particularly pleased with the ongoing recovery in trade with Poland’s eastern neighbours, where KUKE is the only Polish company which provides insurance for commercial and investment transactions. We are particularly pleased with the rising two-way trade with Ukraine, whose economy has stabilized and its growth rate places it at the forefront of European growth. Last year confirmed the strong international position of Polish enterprises which managed to cope with the eurozone slowdown, the confusion around Brexit and the general decline in global trade. There is a widespread belief that in 2020, global economic tensions are likely to weaken. The risk of a sudden shock in trade with the UK, where about 6% of Polish goods and commodities is exported, has been minimized at least for now. Recent initial agreements between the United States and China help reduce tensions in global trade. It can be assumed that - although Washington has announced the start of negotiations on a new trade deal with Brussels, due to its trade deficit, it does not intend to raise tariffs on EU car imports this year, which is beneficial for Poland as a participant of the global supply chain in this industry. It can thus be expected that Polish exports are likely to grow in 2020 on the wave of recovering world trade. The World Trade Organization (WTO) expects trade to increase by 2.7% this year, compared to 1.2% estimated for 2019. According to National Bank of Poland forecasts, Polish exports are expected to increase by 3.4%. A foreign trade surplus is likely to be recorded, mainly thanks to the large surplus in the exports of services, although the transport sector, which has largely contributed to the success, may suffer from the mobility package being introduced in the EU.