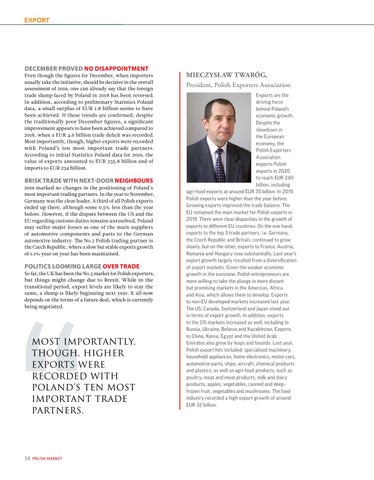 DECEMBER PROVED NO DISAPPOINTMENT Even though the figures for December, when importers usually take the initiative, should be decisive in the overall assessment of 2019, one can already say that the foreign trade slump faced by Poland in 2018 has been reversed. In addition, according to preliminary Statistics Poland data, a small surplus of EUR 1.8 billion seems to have been achieved. If these trends are confirmed, despite the traditionally poor December figures, a significant improvement appears to have been achieved compared to 2018, when a EUR 4.6 billion trade deficit was recorded. Most importantly, though, higher exports were recorded with Poland’s ten most important trade partners. According to initial Statistics Poland data for 2019, the value of exports amounted to EUR 235.8 billion and of imports to EUR 234 billion.

BRISK TRADE WITH NEXT-DOOR NEIGHBOURS 2019 marked no changes in the positioning of Poland's most important trading partners. In the year to November, Germany was the clear leader. A third of all Polish exports ended up there, although some 0.5% less than the year before. However, if the dispute between the US and the EU regarding customs duties remains unresolved, Poland may suffer major losses as one of the main suppliers of automotive components and parts to the German automotive industry. The No.2 Polish trading partner is the Czech Republic, where a slow but stable exports growth of 1.1% year on year has been maintained.

POLITICS LOOMING LARGE OVER TRADE So far, the UK has been the No.3 market for Polish exporters, but things might change due to Brexit. While in the transitional period, export levels are likely to stay the same, a slump is likely beginning next year. It all now depends on the terms of a future deal, which is currently being negotiated.

MIECZYSŁAW TWARÓG, President, Polish Exporters Association Exports are the driving force behind Poland’s economic growth. Despite the slowdown in the European economy, the Polish Exporters Association expects Polish exports in 2020 to reach EUR 240 billion, including agri-food exports at around EUR 35 billion. In 2019 Polish exports were higher than the year before. Growing exports improved the trade balance. The EU remained the main market for Polish exports in 2019. There were clear disparities in the growth of exports to different EU countries. On the one hand, exports to the top 3 trade partners, i.e. Germany, the Czech Republic and Britain, continued to grow slowly, but on the other, exports to France, Austria, Romania and Hungary rose substantially. Last year’s export growth largely resulted from a diversification of export markets. Given the weaker economic growth in the eurozone, Polish entrepreneurs are more willing to take the plunge in more distant but promising markets in the Americas, Africa and Asia, which allows them to develop. Exports to non-EU developed markets increased last year. The US, Canada, Switzerland and Japan stood out in terms of export growth. In addition, exports to the CIS markets increased as well, including to Russia, Ukraine, Belarus and Kazakhstan. Exports to China, Korea, Egypt and the United Arab Emirates also grew by leaps and bounds. Last year, Polish export hits included: specialised machinery, household appliances, home electronics, motor cars, automotive parts, ships, aircraft, chemical products and plastics, as well as agri-food products, such as poultry, meat and meat products, milk and dairy products, apples, vegetables, canned and deepfrozen fruit, vegetables and mushrooms. The food industry recorded a high export growth of around EUR 32 billion.