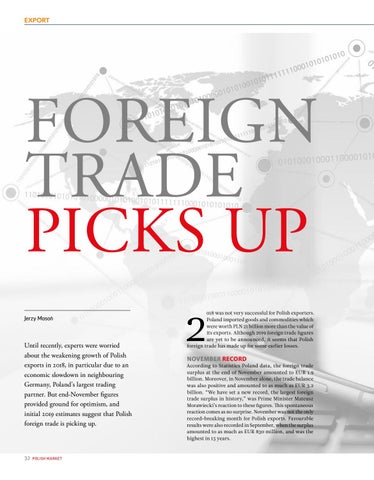 Until recently, experts were worried about the weakening growth of Polish exports in 2018, in particular due to an economic slowdown in neighbouring Germany, Poland's largest trading partner. But end-November figures provided ground for optimism, and initial 2019 estimates suggest that Polish foreign trade is picking up.

018 was not very successful for Polish exporters. Poland imported goods and commodities which were worth PLN 21 billion more than the value of its exports. Although 2019 foreign trade figures are yet to be announced, it seems that Polish foreign trade has made up for some earlier losses.

According to Statistics Poland data, the foreign trade surplus at the end of November amounted to EUR 1.9 billion. Moreover, in November alone, the trade balance was also positive and amounted to as much as EUR 3.2 billion. “We have set a new record, the largest foreign trade surplus in history,” was Prime Minister Mateusz Morawiecki’s reaction to these figures. This spontaneous reaction comes as no surprise. November was not the only record-breaking month for Polish exports. Favourable results were also recorded in September, when the surplus amounted to as much as EUR 830 million, and was the highest in 15 years.