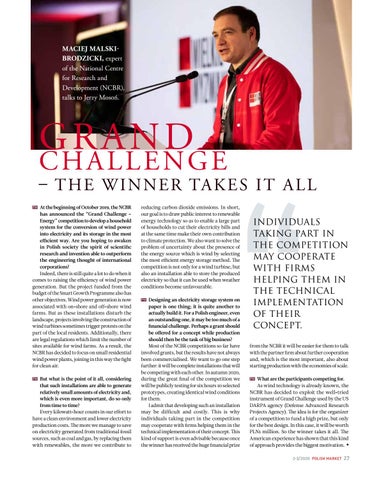 MACIEJ MALSKIBRODZICKI, expert of the National Centre for Research and Development (NCBR), talks to Jerzy Mosoń.

– T H E W I N N E R TA K E S I T A L L At the beginning of October 2019, the NCBR has announced the “Grand Challenge – Energy” competition to develop a household system for the conversion of wind power into electricity and its storage in the most efficient way. Are you hoping to awaken in Polish society the spirit of scientific research and invention able to outperform the engineering thought of international corporations? Indeed, there is still quite a lot to do when it comes to raising the efficiency of wind power generation. But the project funded from the budget of the Smart Growth Programme also has other objectives. Wind power generation is now associated with on-shore and off-shore wind farms. But as these installations disturb the landscape, projects involving the construction of wind turbines sometimes trigger protests on the part of the local residents. Additionally, there are legal regulations which limit the number of sites available for wind farms. As a result, the NCBR has decided to focus on small residential wind power plants, joining in this way the fight for clean air. PM

But what is the point of it all, considering that such installations are able to generate relatively small amounts of electricity and, which is even more important, do so only from time to time? Every kilowatt-hour counts in our effort to have a clean environment and lower electricity production costs. The more we manage to save on electricity generated from traditional fossil sources, such as coal and gas, by replacing them with renewables, the more we contribute to PM

reducing carbon dioxide emissions. In short, our goal is to draw public interest to renewable energy technology so as to enable a large part of households to cut their electricity bills and at the same time make their own contribution to climate protection. We also want to solve the problem of uncertainty about the presence of the energy source which is wind by selecting the most efficient energy storage method. The competition is not only for a wind turbine, but also an installation able to store the produced electricity so that it can be used when weather conditions become unfavourable. Designing an electricity storage system on paper is one thing; it is quite another to actually build it. For a Polish engineer, even an outstanding one, it may be too much of a financial challenge. Perhaps a grant should be offered for a concept while production should then be the task of big business? Most of the NCBR competitions so far have involved grants, but the results have not always been commercialised. We want to go one step further: it will be complete installations that will be competing with each other. In autumn 2020, during the great final of the competition we will be publicly testing for six hours 10 selected prototypes, creating identical wind conditions for them. I admit that developing such an installation may be difficult and costly. This is why individuals taking part in the competition may cooperate with firms helping them in the technical implementation of their concept. This kind of support is even advisable because once the winner has received the huge financial prize PM

INDIVIDUALS TAKING PART IN THE COMPETITION MAY COOPERATE WITH FIRMS HELPING THEM IN THE TECHNICAL IMPLEMENTATION OF THEIR CONCEPT. from the NCBR it will be easier for them to talk with the partner firm about further cooperation and, which is the most important, also about starting production with the economies of scale. What are the participants competing for. As wind technology is already known, the NCBR has decided to exploit the well-tried instrument of Grand Challenge used by the US DARPA agency (Defense Advanced Research Projects Agency). The idea is for the organizer of a competition to fund a high prize, but only for the best design. In this case, it will be worth PLN1 million. So the winner takes it all. The American experience has shown that this kind of approach provides the biggest motivation. • PM