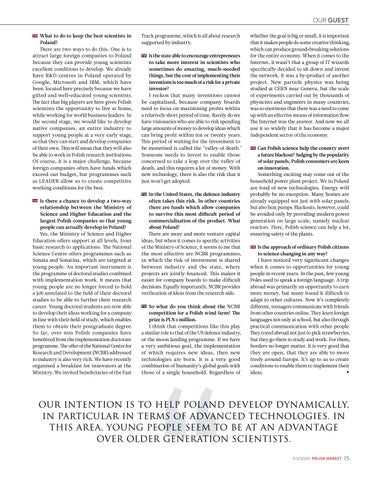 OUR GUEST What to do to keep the best scientists in Poland? There are two ways to do this. One is to attract large foreign companies to Poland because they can provide young scientists excellent conditions to develop. We already have R&D centres in Poland operated by Google, Microsoft and IBM, which have been located here precisely because we have gifted and well-educated young scientists. The fact that big players are here gives Polish scientists the opportunity to live at home, while working for world business leaders. In the second stage, we would like to develop native companies, an entire industry to support young people at a very early stage, so that they can start and develop companies of their own. This will mean that they will also be able to work in Polish research institutions. Of course, it is a major challenge, because foreign companies often have funds which exceed our budget, but programmes such as LEADER allow us to create competitive working conditions for the best. PM

Track programme, which is all about research supported by industry. Is the state able to encourage entrepreneurs to take more interest in scientists who sometimes do amazing, much-needed things, but the cost of implementing their inventions is too much of a risk for a private investor? I reckon that many inventions cannot be capitalised, because company boards need to focus on maximising profits within a relatively short period of time. Rarely do we have visionaries who are able to risk spending large amounts of money to develop ideas which can bring profit within ten or twenty years. This period of waiting for the investment to be monetised is called the "valley of death." Someone needs to invest to enable those concerned to take a leap over the valley of death, and this requires a lot of money. With new technology, there is also the risk that it just won't get adopted. PM

In the United States, the defence industry often takes this risk. In other countries there are funds which allow companies to survive this most difficult period of commercialisation of the product. What about Poland? There are more and more venture capital ideas, but when it comes to specific activities of the Ministry of Science, it seems to me that the most effective are NCBR programmes, in which the risk of investment is shared between industry and the state, where projects are jointly financed. This makes it easier for company boards to make difficult decisions. Equally importantly, NCBR provides verification of ideas from the research side. PM

Is there a chance to develop a two-way relationship between the Ministry of Science and Higher Education and the largest Polish companies so that young people can actually develop in Poland? Yes, the Ministry of Science and Higher Education offers support at all levels, from basic research to applications. The National Science Centre offers programmes such as Sonata and Sonatina, which are targeted at young people. An important instrument is the programme of doctoral studies combined with implementation work. It means that young people are no longer forced to hold a job unrelated to the field of their doctoral studies to be able to further their research career. Young doctoral students are now able to develop their ideas working for a company in line with their field of study, which enables them to obtain their postgraduate degree. So far, over 600 Polish companies have benefitted from the implementation doctorate programme. The offer of the National Centre for Research and Development (NCBR) addressed to industry is also very rich. We have recently organised a breakfast for innovators at the Ministry. We invited beneficiaries of the Fast PM

So what do you think about the NCBR competition for a Polish wind farm? The prize is PLN 1 million. I think that competitions like this play a similar role to that of the US defence industry, or the moon landing programme. If we have a very ambitious goal, the implementation of which requires new ideas, then new technologies are born. It is a very good combination of humanity’s global goals with those of a single household. Regardless of PM

whether the goal is big or small, it is important that it makes people do some creative thinking, which can produce ground-breaking solutions for the entire economy. When it comes to the Internet, it wasn’t that a group of IT wizards specifically decided to sit down and invent the network. It was a by-product of another project. New particle physics was being studied at CERN near Geneva, but the scale of experiments carried out by thousands of physicists and engineers in many countries, was so enormous that there was a need to come up with an effective means of information flow. The Internet was the answer. And now we all use it so widely that it has become a major independent sector of the economy. Can Polish science help the country avert a future blackout? Judging by the popularity of solar panels, Polish consumers are keen on innovation. Something exciting may come out of the household power plant project. We in Poland are fond of new technologies. Energy will probably be no exception. Many homes are already equipped not just with solar panels, but also heat pumps. Blackouts, however, could be avoided only by providing modern power generation on large scale, namely nuclear reactors. Here, Polish science can help a lot, ensuring safety of the plants. PM

Is the approach of ordinary Polish citizens to science changing in any way? I have noticed very significant changes when it comes to opportunities for young people in recent years. In the past, few young Poles used to speak a foreign language. A trip abroad was primarily an opportunity to earn more money, but many found it difficult to adapt to other cultures. Now it’s completely different, teenagers communicate with friends from other countries online. They learn foreign languages not only at school, but also through practical communication with other people. They travel abroad not just to pick strawberries, but they go there to study and work. For them, borders no longer matter. It is very good that they are open, that they are able to move freely around Europe. It’s up to us to create conditions to enable them to implement their ideas. • PM

OUR INTENTION IS TO HELP POLAND DEVELOP DYNAMICALLY, IN PARTICULAR IN TERMS OF ADVANCED TECHNOLOGIES. IN THIS AREA, YOUNG PEOPLE SEEM TO BE AT AN ADVANTAGE OVER OLDER GENERATION SCIENTISTS. 2-3/2020 polish market